THE News Line Editorial Board sends its revolutionary greetings for the New Year of 2011 to all of our readers and to the working class and the poor of the world.

2011 will see the working class of the world, in the fourth year of the capitalist banking collapse and slump, being driven by the crisis and the onslaught of the world bourgeoisie into uprisings and revolutions to put an end to capitalism and imperialism.

This will be the year for building sections of the International Committee of the Fourth International in every country to lead the world socialist revolution to its victory.

2011 will be the year when the Palestinians, sick of decades of Zionist butchery and treachery, declare their own state on the 1967 cease-fire lines, with Jerusalem as their capital, with the Zionist settlements evacuated and with all Palestinian refugees having the right to return.

The world’s trade unions must give their unconditional support to Palestine, and clamp a complete worldwide trade and cultural boycott on Israel, to last until the Palestinian state is recognised.

In the event of a Zionist attack on Palestine, the workers of the world must send volunteers to fight alongside the Palestinians and collect hundreds of millions to arm the Palestinian fighters with the latest weaponry.

Likewise, the world’s trade unions must give their support to the Sri Lankan people, both Tamil and Sinhalese, who are being oppressed by the murderous Rajapaksa dictatorship.

This regime organises armed bands to murder both its Tamil and Sinhalese opponents, while the Sri Lankan masses see their meagre standard of living destroyed by rampaging inflation of food prices.

In Sri Lanka there is unlimited military spending, and the printing of billions in paper currency, while the masses starve and their leaders, whether Sinhala or Tamil, are murdered, attacked or beaten in broad daylight, under police supervision.

Sri Lanka is heading for a massive revolutionary eruption of the working class.

Only a socialist revolution and a workers’ and small farmers’ government can put an end to the misery of the Sri Lankan people, and give the Tamil masses the right of self determination if they wish to exercise it.

As well, we send our greetings to the heroic garment workers of Bangladesh who are resisting some of the most fashionable businesses of the UK, the EU and the US, who refuse to pay them even a minimum wage, and instead subject them to the most brutal exploitation ever seen, even in the Indian sub-continent.

So far scores of garment workers have been killed fighting for the very basic right to live.

This new year will bring a socialist revolution in Bangladesh and see a section of the Fourth International established there to lead the revolutionary struggle.

We send our greetings to the people of Iraq and our confidence that we will see an end to the US puppet regime this year, and the emergence of a genuine popular Iraqi government.

We also send our support to the Iranian people and our full support for their right to develop nuclear power and become an advanced country.

We salute the revolutionary peoples of the Americas, in Cuba, Venezuela, Bolivia and the Argentine.

The Cuban people are no longer on their own in their determination to maintain their national sovereignty, and to fight all the attempts of US imperialism to dominate them politically, and exploit them economically.

The election of President Obama has seen US imperialism adopt an even more antagonistic attitude to the people of Cuba, while establishing seven bases in Colombia from which to threaten Venezuela and Bolivia.

The Fourth International gives its full support to every anti-imperialist action carried out by Presidents Chavez and Morales, while we urge the working class and the revolutionary movement to organise independently of these revolutionary sections of the national bourgeoisie, so that we march separately and strike together, wherever possible.

Meanwhile, we oppose the moves to widen private ownership in Cuba and call for socialist revolutions throughout the Americas.

Today with US capitalism and its banks in their greatest crisis ever, the American workers and youth are being bled white to prop up the bankrupt US capitalist system.

There is 9.8 per cent unemployment. There are a further 40 million workers in part-time jobs, while millions of people have lost their homes in the housing crash and are living in the streets or in tent cities, in every city of the USA.

This rescue operation for US capitalism has been organised by President Obama who has the full support of the trade union leadership, which has spent over a hundred million dollars in union money on his election campaigns.

In return, the working class is being driven into the dirt.

It is now very angry and is not prepared to put up with any more of the Obama rescue operation for capitalism, or with the trade union leaders who are supporting it.

The US workers are now bitterly opposed to the trade unions, subordinating themselves and their members to the bourgeois Democratic party, the party that has rescued the banks and GM at their expense.

In the coming year, this massive and growing anger of the working class will force trade unions to break from the Democrats and to found a Labour Party that will say that if the nationalisation of GM is ok, then the whole of the US industrial and banking system must be nationalised and put under workers’ control so that production can be planned to satisfy the needs of workers.

US workers who have long been calling for an end to the imperialist war in Afghanistan, will oppose US imperialist adventures in south America, and will be a powerful ally of the masses of the Americas in the struggle to smash US capitalism and imperialism to go forward to socialism.

The US ruling class, which has pauperised the US workers, is already planning new wars to try to regain its position as the number one unchallenged imperialist power.

It already has China in its sights, and has its eyes on the vast mineral wealth of the Russian Federation and the Central Asian states.

The Stalinist bureaucracies of Russia and China are literally propping up world imperialism, at the same time as the latter is planning and organising wars against them and anti-imperialist states such as Iran.

Inside Russia and China, the working class is on the move, following the defeat of the Orange revolution in the Ukraine and the recent defeat of the right wing in the Belarus Presidential election.

There is a huge strike movement in China where the working class is pushing up wages in the New Economic Zones, while in Russia and Belarus, the working class is opposing all the continuing attempts by the Stalinist-led Oligarchs to wipe out all of the gains of the October revolution.

China and Russia can only advance to socialism as part of the world socialist revolution.

It is the European Union that is the centre of the world crisis. There, the attempt by capitalism to advance beyond the nation state is drowning in a sea of trillions of euros of debt as the working class in Greece, Ireland, France, Portugal, Spain and Germany resists paying the bill for the crisis.

Greece and Ireland have now been placed under the direct control of the European Central Bank (ECB) and are no longer sovereign states, since their books and their parliamentary procedures have to be approved by the ECB in advance.

The ECB has embraced the belief that destroying the Greek and Irish working classes and the youth through massive austerity programmes is the key to maintaining the flow of huge loans from the international financiers, for the Portuguese and Spanish bourgeoisie in particular.

The EU and the euro single currency is to be preserved on the bones of the Irish and Greek workers.

The working class understandably does not see the matter is this way.

The Greek workers denounce the Socialist Party Premier, Papandreou, as a puppet of the ECB.

The new year will see a workers’ insurrection in Greece.

Now is the time to develop the Greek section of the Fourth International, the Revolutionary Marxist League, to provide the necessary revolutionary leadership to the Greek workers in their struggle to overthrow the Greek ruling class and end the dictatorship of the ECB.

Ireland is only just behind Greece in its development.

Wages and all benefits have been repeatedly slashed by a government that cannot guarantee a single job for the workers, because it has guaranteed to honour all of the debts of the banks which are now under state control.

The Irish nationalist parties of all hues cannot provide an ounce of leadership.

What is required is the building of an Irish section of the Fourth International to lead a socialist revolution to bring in a workers’ and small farmers’ government that will annul the debts, expropriate the bourgeoisie and carry out a socialist reorganisation of the country, including ending its partition.

The Irish working class has had enough of the Irish ruling class and its oppressive state. It views the ruling class as a criminal and corrupt exploiter.

Ireland is rotten ripe for the socialist revolution.

What is required is the building of its revolutionary leadership.

In the UK, Labour rescued the bosses and the bankers and the Tory-led coalition is going to make the working class pay the entire bill for this, with interest, through destroying the NHS, the benefit system, the education system and the Welfare State.

The British banks still cannot exist without state aid. In fact, when the world crisis worsens and their real indebtedness emerges, they will be seen to be in exactly the same position as the Irish banks, needing unlimited support and requiring an unlimited robbery of the working class and the middle class.

The British trade union leaders have not the slightest intention of organising the struggle to bring down this coalition and bring in a workers government and socialism.

The New Year’s statement of the general secretary of the TUC says that 2011 will be a ‘horrible year’ as he draws up a list of the massive cuts.

He writes that in 2011 ‘Unemployment will increase as thousands of public servants get made redundant. Just as many – if not more – private sector jobs will go, both as a direct result of the cuts and through the knock-on effects of reduced economic activity.

‘Benefit cuts will kick in, and thousands of some of the poorest and most vulnerable people will see real cuts in their living standards.’

He adds: ‘It’s hard to pick out the unkindest cut of all.’ His solution is for everybody to wait for March 26, when the TUC is organising a march whose object is to persuade the Tories to ‘change course’.

The British workers have nothing but contempt for this trade union bureaucracy buffoonery.

In 2011 the struggle in Britain will be fought to a finish.

The defence of the Welfare State requires a general strike and a socialist revolution to expropriate the bosses and bring in a workers government.

Only the WRP, the British section of the Fourth International, is fighting for this policy which has the support of the working class.

The bankrupt EU will be replaced by the Socialist United States of Europe.

Capitalism is in its death agony. It requires burial by the working class and the victory of the world socialist revolution to carry humanity forward to the new society.

It is this struggle that is on the agenda for 2011.

VOTE WRP ON DECEMBER 12! BREAK WITH THE EU! FORWARD TO A WORKERS GOVERNMENT AND SOCIALISM! WRP 2019 Election Manifesto 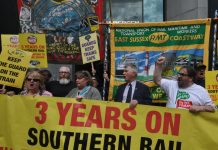 Quit the EU! Forward to a workers government! – WRP MAY DAY MANIFESTO