Home About Us Manifesto for 2019 General Election 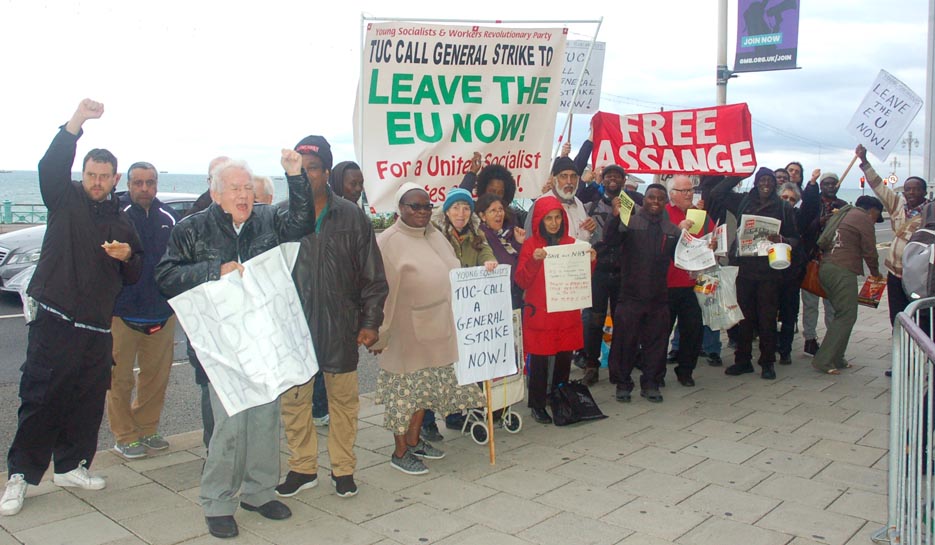 THE DECEMBER 12th election is a crisis election, in a situation where the worldwide crisis of capitalism is deepening rapidly to explosion point. Eleven years after the Lehman Brothers crash which triggered the 2008 economic catastrophe the capitalist system is once again up to its neck in debt!

In the USA President Trump is frantically driving interest rates down and managing a vicious trade war against the EU and China to try and maintain his alleged jobs boom until at least the 2020 November Presidential election.

However, major sections of the world are already being revolutionised as hundreds of millions of workers battle against the austerity measures that the IMF and the World Bank are imposing to make workers pay for the capitalist crisis. Millions are on the march in Ecuador, Chile, Bolivia, Lebanon, and Iraq, at the way that their societies have been collapsed to pay for the worldwide crisis of capitalism.

Meanwhile in Europe, the ‘Yellow Vests’ movement has been fighting for many months against the paramilitary forces of the French police state. They have fought the state to a standstill, with record suicide rates amongst the once feared riot police. State violence and the false promises of President Macron have not been able to pacify them. In Spain the masses of Catalonia have risen to demand independence, while in Germany the ‘economic miracle’ is ending and the German banks and industries are involved in a trade war with the US.

When the 2008 crisis hit the EU it found a way out by bankrupting Greece and imposing massive austerity programmes on Ireland and other EU states. In the current crisis the EU central bank is preparing new and even more vicious austerity measures for the European workers as the crisis deepens.

In the crisis touched off in the UK by the Lehman’s crash in 2008, Labour Premier Brown and the then Tory leaders Cameron and Osborne poured over a trillion pounds into rescuing the British banks from a crisis of their own making. British workers paid for this with 11 years of super austerity, in which wages were cut and benefits abolished by the notorious Universal Credit plan for disciplining the poor. People now sleep on the streets, hundreds of thousands use food banks, and teachers bring in food and clothing to schools for their pupils. Students have been impoverished with huge fees and privatised student accommodation.
This desperate situation set the scene for such man-made disasters as the Grenfell inferno where a high rise block was coated in the most inflammable material possible, even after there had been many warnings of the dangers this posed.

In fact the Referendum vote in 2016 was the working class and sections of the middle class’ rejection of the 19th century conditions that were ushered in by governments after the 2008 crash. The poor were crushed. The lives of workers were destroyed to make sure that the bankers and the super rich survived the crisis.

The response of the ruling class and ruling parties to the 2016 referendum vote has been to fight it, delay it, dilute it, and if possible destroy it. Parliament has refused to implement it! Tory and Labour MPs are desperate to remain part of the European Union, and in fact see it and its European Court of Justice as a weapon that they can use against the working class at home.
With a new economic catastrophe developing it is a matter of life or death for the UK working class that it leaves the EU, without a deal and without paying a penny for leaving, to go forward to socialism.
The WRP calls on the trade unions to reject the TUC leadership and to pledge to take strike action including general strike action to force Britain out of the EU.

The WRP calls for leaving the EU without any ‘compensation’ of any kind.

It urges that this action must be the beginning of the British socialist revolution that must go on to nationalise the banks and the major industries putting them under under workers’ management.
The housing crisis must be resolved by Workers Councils of Action being established to take over all empty properties to put them at the disposal of homeless families. These Workers Councils of Action will also work with the fire brigades to ensure that all properties are fireproof and that there are no more Grenfell Towers. The building land and building industry must be nationalised along with the banks so that millions of new council homes can be built for rents that can be afforded by all working class families.

The WRP demands that there be a minimum wage of £12 an hour for all workers over 16, and that the voting age be lowered to 16 so that young workers can play a real role in deciding the future.

On education, the WRP calls for the ending of all academies and for the highest quality state education to be re-established, with no access for big business to make super profits as in the academy system. We would restore free university education, end all fees, restore bursaries and grants and end the privatisation of student accommodation.

On health, all privateers must be driven out of the NHS and a huge state funding allocated to provide more doctors, nurses and health staff, to reopen hospitals and hospital departments that have been closed under the Tories and restore the NHS as ‘the jewel in the crown’ and the envy of the world.

On foreign policy, the WRP calls for 100% support by the UK trade unions and by a UK workers government for uniting with workers in France, Germany and all over the EU to establish a Socialist United States of Europe to replace the bankrupt bankers and bosses of the EU.
The WRP calls for the recognition of the state of Palestine with Jerusalem as its capital and an end to Israeli occupation. We also call for all UK troops to be withdrawn from Syria and all countries where they play an occupying role.
We urge you to vote WRP in the six seats that we are standing and to vote Labour in the remaining constituencies.
The Tory party has been split over Brexit, with Johnson leading the Brexit wing. Workers have noticed that Johnson however remains a servant of the capitalists and their state. His brave words of leaving the EU ‘do or die’, or that he would ‘rather die in a ditch’ than agree to the EU leaving date being extended to January 31, were all eaten by Johnson himself. Despite all his bluster he proved unwilling and unable to fight the capitalist state with a ‘no deal’ policy.
The state protects the interests of the ruling class to which he belongs, and his allegiance to it means that he cannot advance the interests of the working class in any way. His tamest of Brexits will see the UK tied to the EU and paying billions for the privilege of trade talks lasting for years, before he then tries the same manoeuvre with the USA.

he WRP campaigns for an immediate ‘no deal’ break with the EU and no payment of billions in compensation.

We urge workers to vote WRP, to break with the EU, establish a socialist UK and seek to move forward to a Socialist United States of Europe, based on the Europe-wide nationalisation of the banks and major industries.

Where we are not standing we urge workers to vote Labour, but not just to stop with a vote. Labour, despite its support for a second referendum and its support for a customs union, remains the main workers party and is still based on the UK workers trade unions.
Labour is now in the most desperate crisis. It is a fact that in the House of Commons vote for a general election, moved by Labour leader Corbyn on Tuesday 31 October and passed by 438 to 20, 104 Labour MPs defied the Labour whip and abstained while 127 voted for.
On top of this, a further 11 Labour MPs, including leading right-wingers Margaret Becket, Ann Clwyd, David Lammy, Barry Sheerman and Owen Smith were amongst the 20 who voted against. Amongst those abstaining was prominent Labour right-winger Harriet Harman. 54 Labour MPs signed an amendment that would change the date of the general election from 12th December 2019 to 7th May 2020 to facilitate a second referendum. More Labour MPs abstained or voted against an election than voted for!

The task of running the country cannot be left to ‘big business’ and Boris Johnson, or to Labour MPs who support the EU and do not support Labour or the millions of workers who voted ‘Leave’. Above all Labour MPs must be told by their constituency parties that they must support leaving the EU, as stated in their last 2017 Election Manifesto, and oppose any second referendum or customs union. The trade unions must insist that the pro-EU right wing MPs must be replaced – this is the only way to stop this right wing group splitting the Labour Party.

We urge all workers and youth to vote WRP where we are standing and to join the WRP and the Young Socialists wherever you live, to build the revolutionary leadership and the revolutionary party that will lead the British socialist revolution to its victory! The 2016 Brexit referendum result must be carried forward to its conclusion!