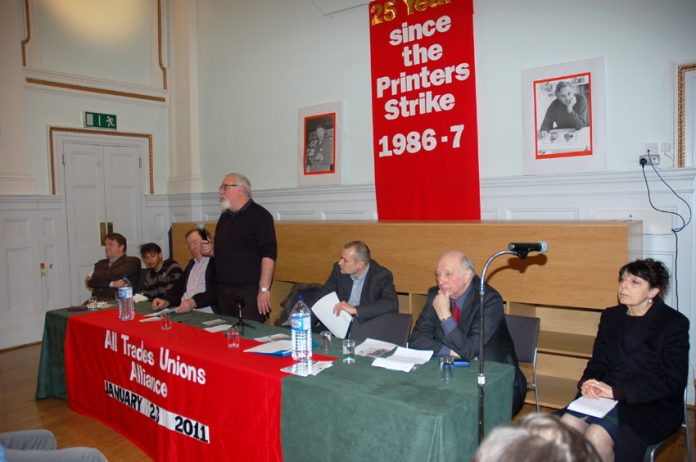 ‘The historic printers’ strike set the scene for a struggle, not just against Murdoch but the whole capitalist state,’ All Trades Unions Alliance national secretary, Dave Wiltshire, told an audience of over 200 workers and youth on Sunday.

He was opening a powerful 25th anniversary meeting of the heroic 1986-87 strike, at the St Bride Institute in Fleet Street.

A special tribute was paid to those who died since the dispute, including cartoonist Tony Hall and former print union NGA FoC John Breen.

Dave Wiltshire added: ‘Printworkers were defiant, 1,370 were arrested and one, Michael Delaney was killed but they couldn’t be defeated, instead they were betrayed by the TUC and the EEPTU’s scabbing.’

He stressed: ‘The lessons of Wapping are vital for today.’

He added: ‘It really kicked off when Thatcher came to power and with the Eddie Shah dispute.

‘What ran throughout these disputes was the preparedness of the state. Police attacked pickets with a viciousness. Police violence was taken to a new level in the miners’ strike.’

He said the printers had supported the miners with food and political support.

Dubbins went on to describe the use of riot police, with horses repeatedly charging pickets and demonstrators at Wapping during the printers strike.

He said the printers waged a ‘fantastic’ struggle, adding: ‘We should pay tribute to the brave men and women and their supporters.

‘Unfortunately many never got a job again, that’s what Murdoch wanted – but it was absolutely correct to fight.’

He went on to say that ‘Today, as far as we are concerned, Murdoch is unfinished business. A fightback is on under way.’

He added: ‘Unite is 1.5 million strong. We are a powerful force.’

He said that it was ‘an absolute disgrace’ that after 13 years of a Labour government that anti-union laws are still in place.

He added: ‘John Breen was an internationalist – he worked to support Cuba– Cuba is no longer isolated.’

Dubbins said today there is a ‘ground swell of unrest and we are building for March 26’ when the TUC will stage a national demonstration against the Tory-LibDem coalition’s savage spending cuts and attack on the Welfare State’.

‘What was more important was the role of the union leaders. The EEPTU went to Southampton and recruited scabs. That was an act of betrayal.’

Rogers said that today ‘the issue is are we going to have leaders that give in to the Tories or leaders that stand up and fight’.

He added: ‘The Tories have to destroy the whole welfare state. The only way forward is to build a revolutionary leadership in the trade unions.’

Paul Lepper, Young Socialist Editor, said: ‘This is not just a commemoration of the printers strike, it’s important for the future.

‘The state was used against the printers.

‘What we are fighting for today is the whole of the Welfare State – education, housing, the NHS.

‘The fight we are in today is at another level.

‘The state will be used against us. You saw how the police used the tactic of kettling against the students.

‘In Birmingham, police smashed up an occupation.

‘These are fights that we have to carry through to victory.’

Former National Union of Mineworkers President Arthur Scargill told the rally: ‘We are meeting today to report on an historic struggle.

‘We have to look to the future. If we don’t learn from the past, meetings are irrelevant.

‘I want to make one thing clear, Scargill and Mick McGahey did not call off the miners strike, at three conferences it was called off.

‘We had members of the Communist Party, from the beginning, arguing against the strike but we had miners fighting for all of 12 months.’

He added: ‘History has taught us an important lesson – if you don’t fight back, they’ll always come after you.

‘The way to fight back is to strike – stuff the ballot! What about their illegal war on Iraq? There was no ballot on that!’

He added: ‘What we face is not a banking or finance crisis, it’s a crisis of capitalism.

‘It’s a rotten, corrupt system and it deserves to perish.’

He said what was important about the miners and printers disputes was ‘the collaboration of TUC leaders, Hammond and the right wing of the Labour Party, betraying the printers and the miners’.

He said in 1972 and 1973, the miners had brought the Tories ‘to their knees’, adding: ‘We should have understood that. We should have just have wiped them out.’

He saluted the printers for refusing to print a picture of himself portrayed as Hitler in ‘The Sun’ and for getting a Right of Reply in the ‘Daily Express’.

He said that ‘Tony Hall’s work inspired miners’ and that ‘John Breen organised the Right of Reply’.

Scargill added: ‘It’s high time that leaders of the trade union movement did not just sit in their cars, but lead from the front.’

Scargill said he was ‘a lone voice’ on the TUC General Council who called for the EEPTU leader Hammond to be expelled and for to whole movement to be brought out.

He stressed: ‘The printers’ support was an inspiration during our strike, as a class way forward.

Unite MoC Sheila O’Regan said: ‘The NGA was a craft union. It built up very strong conditions for its members, it had tremendous power.

‘You went to the union for a job, it was a closed shop. That’s what Thatcher wanted to smash.’

She said: ‘The miners’ and printers’ strikes weren’t disputes, it was a war. They battled with the state and workers supported them.

‘The real thing is they were left to fight alone by the TUC.

‘But workers wouldn’t go back. It’s a tough working class.’

Paying tribute to John Breen and Tony Hall, O’Regan said ‘Everything John Breen did was for others, he never gave in, and every line of Tony’s work was a statement’.

She said although the printers were betrayed by the TUC and Hammond, ‘the EETPU have had their comeuppance.’

She added: ‘I was there when the EETPU was expelled (from the TUC).’

She said the Tories of today are like Thatcher: ‘Murdoch is still with them. it’s the same gang.

‘But this time they are taking on the whole working class and the youth.

‘Workers have learned, they know you have to bring the whole working class out.

‘You have to bring this government down and take power and bring in a socialist government.’

She added: ‘Millions are fighting all over the world.

‘People all over the world have had enough.’

She concluded: ‘The next round of battle we have to win, it has to be victory. We are going to bring this government down.’

Frank Sweeney, WRP General Secretary, told the Meeting: ‘The 1983 Eddie Shah dispute in Warrington was a dress rehearsal for the miners’ strike and Wapping.

‘It was the first test of the anti-union laws which saw the use of police violence and a union sequestrated, as were the NGA and SOGAT during Wapping.

‘The NGA in Warrington was carrying out TUC policy but the TUC repudiated the NGA.’

Sweeney added: ‘We have to build a new leadership.

‘The battle ahead is really going to be the mother of all battles. There will be no compromise, things will have to be fought out to the finish.

‘We have to bring down this government and go forward to a workers government, and socialism – in Britain, Europe and the world.’

Former News of the World compositor John Clifford told News Line: ‘Murdoch wanted to save money and impose his views on the public.

‘The best way to dispose of unions is to get rid of them.

‘Hammond and the EEPTU stabbed us in the back by providing scabs.

‘This politicised my views. Thatcher was the instrument to get rid of the unions with the aid of the Met Police.’

John Bailey, ex-Sun compositor and NGA strike committee, added: ‘I was politicised by the activities of John Breen.

‘We marched with the nurses and we were sacked but were reinstated by the editor because his wife was a nurse.

‘Murdoch issued a writ for losses of advertisements.

‘The chapel didn’t agree with what was in the Sun, we were told we were interfering with freedom of the press.

‘There was no support from our union. The bank would not give Murdoch money for Sky until Wapping was solved.’