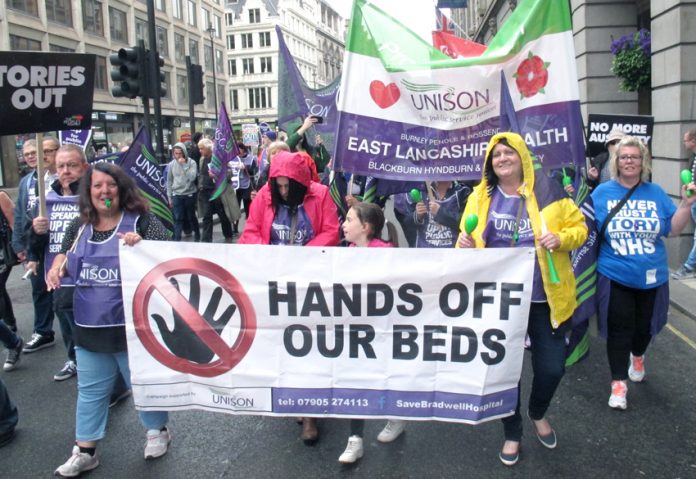 ON 21st March 2018, Jeremy Hunt announced the government was offering NHS staff on Agenda For Change (AfC) a new pay offer. Newspapers ran headlines about a 25% pay rise. In fact, this was untrue as the sum included annual increments that exist at the moment.

Devoted NHS staff held the NHS together during the NHS Winter crisis, despite the ‘third world’ conditions they had to work in, by coming in to help on days off, working through breaks and staying late. The government is implementing the Five Year Forward View ( FYFV ) of NHS England December 2014 to get the NHS cut and privatised by 2020. The FYFV plans the above cuts, the closure of district general hospitals and GP surgeries, the selling-off of NHS land and assets (Naylor plan), and new American-style models providing health and social care, designed for private companies.

The FYFV also demands a new 24/7 ‘modern workforce’ with increased productivity and changed contracts. Already in 2016, NHSE and Jeremy Hunt SoS for Health, forced a rotten contract on the junior doctors, taking away automatic pay progression and unsocial hours pay, and abolished the nurses’ bursary.

The details of the offer are laid out in the ‘Framework Agreement on the proposed reform of Agenda For Change’ 21.March 2018, headed ‘THE NHS STAFF COUNCIL WORKING IN PARTNERSHIP.’

NHS union leaderships have been in discussions with NHS Employers since 2014. The leadership of Unison and Unite have recommended it to their members. Only the GMB leadership has opposed it. The first principle to note is that this is NOT just a pay offer but contract reform.

The key points in the deal are:

• 2. The scrapping of Band one pay rates.

• 4. An end to automatic pay progression and replacement with performance-related pay.

• 6. A new provision to expand apprentices in the NHS.

This brings their wage up to £8.93 per hour, 20p more than the Living Wage which must be adhered to by law this year.

3. The offer does nothing to address the 14% historic pay cuts of the last seven years, since George Osborne brought in the public sector pay cap of 0 to 1% in 2011. It is clear that to recommend a below-inflation pay offer is a sell-out by the trade union leaders. The lowest paid had to have a rise to bring them up to the ‘Living Wage’.

What is being sold?

Hunt said this is a ‘something for something’ pay offer. It would increase productivity and crack down on staff sickness. But how can productivity be increased, when with 42,000 nurse and midwife vacancies, every nurse and midwife is already working to the limit. Unless of course, more vacancies are left unfilled and less trained staff continue to replace trained staff. It is obvious why staff go sick from stress.

A treasury spokesman said: ‘We have allocated money for nurses pay and other employees across the NHS because we are achieving contract reform and productivity improvement.’ It should be noted that it is the government, rather than the employers who are footing the £4.2bn bill for this deal. The government is funding it, because it is worth it, to achieve contract change.

NHS employers, NHSE and the government have been trying to abolish automatic annual increments since 2012. Trusts spend 70% of their funding on pay. They say that automatic pay increments adds 2% p.a. to trusts pay bills and give staff an average 3% pay rise annually. Therefore, to abolish annual pay increments means a huge saving in the pay bill for employers, and a huge cut in pay for NHS staff.

Annex B (pages 15-21) deals with pay progression in great detail. There would be ongoing annual appraisals. (pages 17-18.) ‘the employee has a responsibility to actively participate in annual appraisals and agree with their line managers their Personal/ corporate objectives’. There have to be… ‘outcomes in line with the organisation’s standards’. Statutory and mandatory training must have been completed.

Each band, instead of consisting of automatically rising pay over 5 to 8 annual steps to get to the top of the band and slightly beyond, will now consist of flat pay, until an intermediate or end ‘step- point’ is got through. A minimum time for these are set at two to five years according to band, but no maximum time (page 6). So there is nothing to stop pay being held up at the new intermediate and top ‘step points’.

Getting through these ‘step-points’, will require sitting down with the line manager and ensuring that the appraisals, standards, corporate objectives, training etc. have all been judged by the manager to allow progression. As most trusts in England are in deficit, the top objective of the board is always to make cuts. That means reducing the pay bill. So there will be huge pressure on managers to find reasons not to allow staff through the step-points. ‘The new pay progression system will not be automatic.’ ( 4.3c )

If the staff member wants to appeal a decision on getting through the ‘step- points’: Guidance…will be produced in partnership… ‘including appeal processes’. So guidance on how to appeal has not been agreed or published yet!

Staff could find themselves embroiled in ongoing bureaucratic appeals to rise through a step-point, that go nowhere fast. Individual workers will be fighting for their own individual ‘step-point’ rise. Gone would be the automatic rises for 5 to 8 years in a row. For performance-related pay: ‘Successful implementation relies on good working relationships between NHS organisations, the NHS Staff Council and Line Managers and their staff.’

‘The NHS Staff Council will oversee the implementation of the pay progression system.’ (4.4)

There will be: ‘Support from NHS Improvement (NHSI) which will be supervising and controlling the whole process.’

NHSI was formed by the fusion of Monitor and the Trust Development Authority whose roles were to promote and regulate a competitive market in healthcare (Health and Social Care Act 2012). NHSI forces trusts to adhere to Financial Control Totals to cut costs. KPMG and McKinseys management consultants have just been paid £1m to advise NHSI on its ‘operating models and values’.

So we discover that the entire running of the pay progression system for over one million NHS staff on AfC, is to be supervised by NHSI guided by private management consultants!

6. ‘A new provision detailing pay for apprentices.’ pg. 4 The Framework says: ‘This will help employers find affordable solutions, that make maximum use of the apprenticeship levy, to develop a new workforce, as well as the existing workforce, to increase capacity.’

The NHS Staff Council is to negotiate the new provision and add it to the ‘NHS Terms and Conditions of Service Handbook.’ So this expansion of apprentices in the NHS would become part of the new Agenda For Change national contract. The door would be open to an influx of cheap unskilled labour to flood the wards, clinics, and care homes.

This ‘Framework Agreement’ is a disgraceful betrayal of NHS staff mainly by the leadership of the big NHS unions – Unison and Unite. It proposes another real terms pay cut for the majority of staff and very damaging contract reforms. The defence of national contracts and the fight for decent pay and safe staffing levels with good trained-staff-to-patient-ratios, is the fight to defend the NHS and keep out the privateers. It is urgent to build a new leadership in the trade unions, and throw out the treacherous collaborators at the top.

All the unions need to take strike action to remove this privatising Tory government. Capitalism, in its crisis, has to destroy the NHS. Super-exploiting and impoverishing the staff is essential for their privatisation agenda. We need workers’ government with socialist policies to restore our NHS on its founding principles.