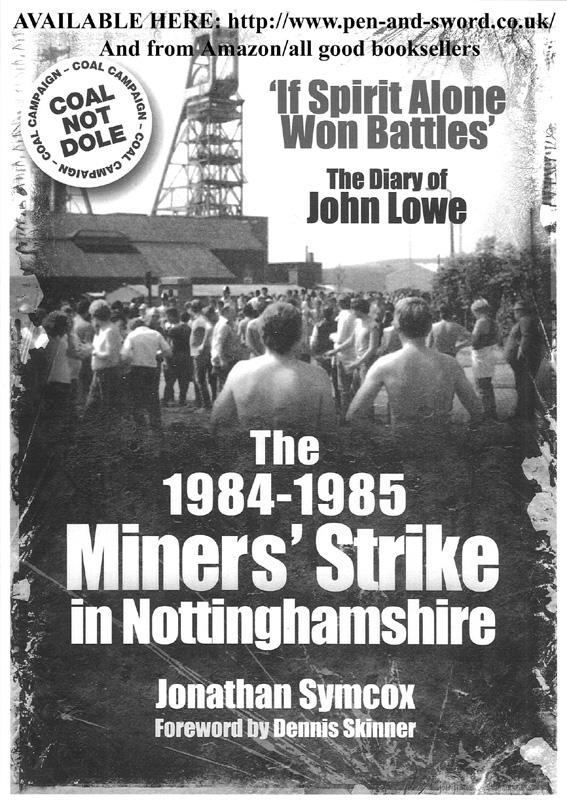 THE DIARY OF JOHN LOWE

The 1984-1985 Miners’ Strike in Nottinghamshire edited by John Symcox

These diary excerpts are a tribute to the heroic and determined minority of Nottinghamshire NUM members, as seen through the eyes of the Clipstone Colliery strike leader.

They stuck it out in the face of Tory-organised mass scabbing during the historic 1984-85 strike.

Editor Symcox says of his grandfather John Lowe ‘he was foremost a man of principle and honour’.

Lowe’s wife Elsie says of her late husband, who died in 2005: ‘He always held his head up, no matter what.’

The diary is split into five parts. Part 1 April-May 1984: Lowe begins by expressing ‘our shame’ that Clipstone Colliery, near Mansfield, ‘waited five weeks before joining the efforts of 80 per cent of British coalfields in their opposition to (National Coal Board [NCB] boss) “Butcher McGregor”.’

On April 15, he records a fateful monthly NUM branch meeting when out of 600-700, just 50 or so joined the strike after his call for ‘men with red blood in their veins’ to join him outside.

From the start, flying pickets had to battle with police road blocks, while the strike committee battled for finance to keep them on the road while maintaining the local picket lines.

On April 20, he notes that the strike has been declared official by Notts Area secretary Henry Richardson.

On April 24, branch officials get involved but are not keen to give leadership.

But a Women’s Support Group is set up, which proves to be invaluable.

On Tuesday May 1st Lowe slams a ‘Right to Work’ scabs demonstration at Berry Hill, saying the ‘disgraceful aspect’ was that branch officials conspired with the pit management.

Bank Holiday Monday 7th May was the national demonstration in Mansfield, which was attacked by police at the end.

On Monday 14 May, Lowe lists opposition to strikers from branch officials, the local miners’ welfare committee, church authorities and local labour councillors, and on Wednesday May 14 a miner’s welfare sit-in is organised.

After much toing and froing strike HQ is settled in a local St John’s Ambulance hut.

On Sunday May 27 is a first mention of being aware that strikers’ phones are being tapped by the state, so code is used for flying picket arrangements.

Part 2 June-August 84: a June 7th entry recalls a London national demonstration is attacked by police, first at Jubilee Gardens, then outside Parliament.

Lowe is shocked at the way the police treated the wife of a striker they had arrested. He records police telling her they were ‘running a Police State’ in England.

On June 8th, he receives hate mail from an unnamed scab, this is followed by a letter from management appealing for men to return to work.

Friday June 15: ‘Joe Green, Yorkshire picket, was killed by a lorry on the picket line today. Number two, how many more?’ This latter was a reference to David Gareth Jones from Ollerton colliery who was killed just days after the strike began.

On Monday 18 June, he records ‘stories coming through of the horror of Orgreave’, the pitched battle with miners attacked by mounted and riot police during a mass picket of a coke depot.

Lowe concludes that police used Orgreave as an opportunity to ‘test the efficacy of their public order strategy’.

Wednesday June 27 ‘the day my luck ran out’, Lowe gives a vivid description of his brutal picket line arrest and subsequent interrogation by police and special branch officers.

On Tuesday 10 July – as tensions mount – a striker is attacked at his door by a scab with a bow saw, leaving him needing 130 stitches.

Sunday 22 July ‘Maggie and the media’ attempt to isolate the NUM. Lowe notes of her ‘enemy within’ comment that ‘her desperation was obvious’.

Friday 27 July, he is shocked by the brutal treatment of strikers’ pensioner friend Sid Richmond ‘in his seventies’ who was arrested on his way to visit his daughter.

Saturday 4th August the ‘family situation’ – ‘My wife is 101% behind my stand. Two sons are scabs, as is son-in-law at Mansfield Colliery.’

He adds that ‘the hardest part is not seeing grandchildren’.

Part 3 September-November 1984: Lowe is hurt by the TUC refusal to call others out.

Friday 14th September talks between the NUM and Coal Board break down, and he recognises ‘this is now a fight to the death’.

Tuesday 2nd October, the NUM leadership is ‘served with injunction during (Labour Party) conference’, which he predicts will ‘lead to sequestration’.

He expresses illusions in Labour, saying ‘how we need a Labour government’.

Wednesday 17 October NACODS strike announced for following week. But this does not materialise.

Sunday 28 October, he records ‘latest media “go” at us today saying Libya’s Gadaffi has been approached for support’.

Friday 16 November ‘noted TUC boss Norman Willis had a rough time in Wales when he condemned violence’ and that ‘Kinnock came under fire at local level’.

On 30 November: ‘The High Court today put the receiver in charge of our National funds.’

Part 4 December 1984-February 1985: An entry on 3rd December salutes the NUM special delegate conference decision to ‘carry on with strike in present form and to have nothing to do with courtroom decisions’.

He relates the tough build up to Christmas, relieved by welcome donations of toys for the children and seasonal parties.

After a Christmas and New Year lull, Wednesday 2nd January ‘back to the grind’.

In this new year, police pressure intensifies. On Monday 21 January, the government torpedoes talks with Coal Board.

The TUC get talks going again but by Wednesday 6th February ahead of the next day’s NUM Executive meeting, ‘media putting out story that South Wales Area is to ask for a return to work without agreement’.

In the days to come this turns out to be true, despite the cost of the strike coming out, with Lowe recording on Wednesday 13 February ‘Electricity Generating Board losses £2bn, pound going through the floor, share price index falling’.

Part 5 March 1985: On Friday 1st March, commenting on Area delegate conferences the next day ‘seeming to be favouring a return with out agreement’, he says ‘I feel, emotional, betrayed, sold out; and very sad’.

Sunday 3rd March, the special delegate conference ‘decided narrowly 98-91 that the strike was at an end’.

Monday March 4th: ‘We finished as we started – on the picket line.’

Among his conclusions on Friday 8th March: ‘The sort of recognition we need for this industry and many others will never be achieved under the present political system – even Labour administrations pay only lip service to what I now recognise as socialism.’

On International Day of the Midwife the RCN calls for a 12.5% rise for maternity staff

Canadian government to ‘rip away’ dockers’ right to strike