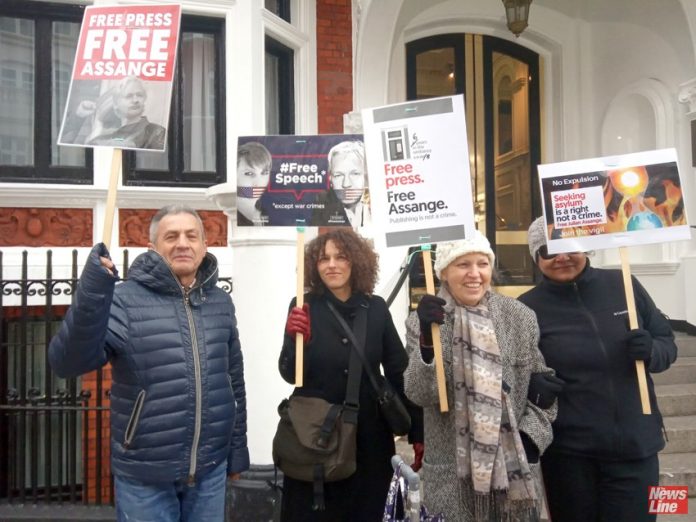 WIKILEAKS co-founder Julian Assange was forcibly arrested and dragged out of the Ecuadorian embassy in London yesterday. In an unprecedented move the embassy allowed the British police in, despite Assange being an Ecuadorian citizen under their protection.

Assange took refuge in the embassy seven years ago to avoid extradition to Sweden which was seen as a precursor to further extradition to the US where he could face charges after exposing the terror that the US and UK forces unleashed during the wars in Afghanistan and Iraq.

The Met Police said he was arrested for failing to surrender to the court.

George Galloway said he is ‘shocked’, that Assange, has been arrested, adding that ‘a great crime has been committed’ against the Wikileaks Founder, insisting the Ecuadorian and UK governments should feel ashamed of such action’.

Galloway, said yesterday: ‘I’m very shocked … Julian Assange is a friend of mine, more importantly, a friend of truth, a friend of the people. He exposed great, great crimes and now another great crime has been committed against him.

Wikileaks have tweeted, claiming Assange has been ‘arrested for extradition to the United States for publishing’.

The whistleblower garnered massive international attention in 2010 when WikiLeaks released classified US military footage, entitled ‘Collateral Murder’, of a US Apache helicopter gunship in Iraq opening fire on a number of people, killing 12 including two Reuters staff, and injuring two children.