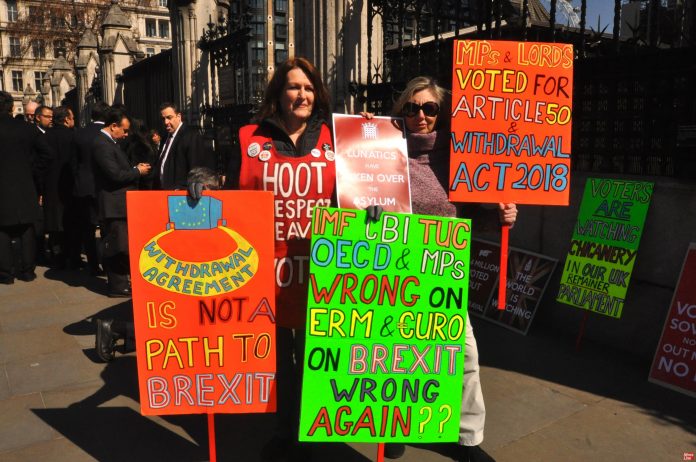 DURING the House of Commons Prime Ministers Questions yesterday, both Tory PM May and Labour leader Corbyn avoided the burning issue of the hour, Brexit, creating a massive ‘elephant in the room’.

The Labour leadership and the Tory leaders have been engaged in joint talks all week in an attempt to undo Brexit by making a deal to include a fully fledged Customs Union and alignment with the Single Market.

However, Craig Tracey, Tory MP for North Warwickshire, broke the conspiracy of silence and asked: ‘I fully agree with the Prime Minister when she has repeatedly said that we need to uphold the result of the referendum and our election commitments, which mean leaving the Customs Union and the Single Market.

‘So does my right honourable friend agree with me that the best way to do that, rather then delivering a diluted deal, which is unrecognisable to many of us who voted to leave, is to go under WTO rules?

‘We should grab that opportunity and believe in the ability of the British people and a Conservative government to make a success of it.’

A rattled May answered: ‘I believe that a Conservative government will make a success of whatever the situation is in relation to Brexit.

Yesterday, the Daily Telegraph wrote: ‘Philip Hammond raised the prospect that MPs will revoke Article 50 this week rather than allow Britain to leave without a deal if Brexit talks collapse.

‘The Chancellor warned on Tuesday that the value of the pound could fall significantly if Theresa May fails to reach agreement on a Brexit delay with Brussels.

‘He suggested that the impact of uncertainty on the markets could encourage MPs to vote to reverse Brexit by revoking Article 50.

‘David Lidington, the Minister for the Cabinet Office, is said to have warned that the government would no longer be in control and that Parliament and the Speaker would determine how to proceed.’

Meanwhile, the EU leaders met for an emergency summit in Brussels yesterday to decide whether to offer the UK another delay to Brexit.

They are expected to extend Article 50 beyond June 30 making it certain that the UK would be forced to take part in the European elections, something that millions of workers in Britain are completely opposed to.