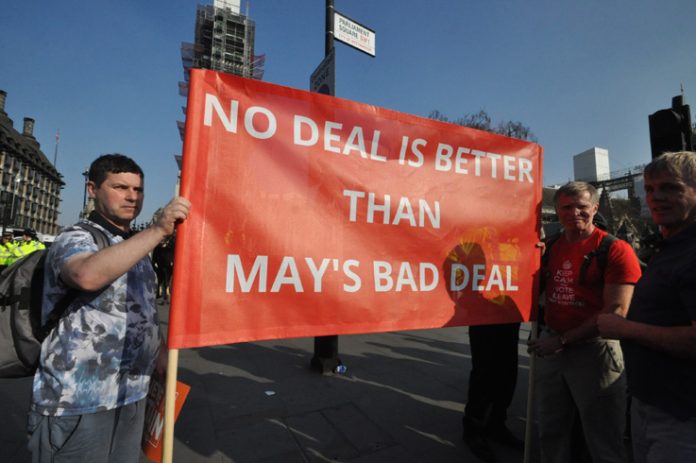 AT 10:36 yesterday morning PM May announced that she will resign as PM on June 7.

She said: ‘I have agreed with the Party Chairman and with the Chairman of the 1922 Committee that the process for electing a new leader should begin in the following week.

‘I have kept Her Majesty the Queen fully informed of my intentions, and I will continue to serve as her Prime Minister until the process has concluded.’

In fact she did not implement what was decided. Her role was to hold up Brexit.

She has done her job. She has held up Brexit, and given the anti-Brexit right wing time to organise its resistance, and its campaign for a second referendum.

She has gone down in flames attempting to bring in a deal which would have kept the UK under the thumb of the EU, its Customs Union and its European Court of Justice.

In fact, what wrecked her government was the fact that the working people of the UK would not accept her betrayal.

This resistance has both stymied her, and the pro-EU majority of the House of Commons, from the majority of Labour MPs to the SNP and the Liberal Democrats that have made it clear that they will accept nothing less than a second referendum that decides to remain in the EU.

Her resignation speech was, at best, self-delusion on a massive scale.

She spoke about her desire ‘to give a voice to the voiceless, to fight the burning injustices that still scar our society … And that is why I set up the independent public inquiry into the tragedy at Grenfell Tower – to search for the truth, so nothing like it can ever happen again, and so the people who lost their lives that night are never forgotten.’

In fact, it is a matter of record that she was among the last of the UK’s leaders to visit the site of the Grenfell fire for which she apologised to the survivors, many of whom are still not rehoused.

Her government has seen not just super-deregulation but also the Windrush scandal and the rise of the food banks as super-austerity has imposed slashed living standards and Universal Credit on the mass of workers with more and more homeless and people living on the streets.

She has now announced her resignation and good riddance to her. Her fall must be the signal for workers to rise up to bring down the Tories, to bring in a workers government that will quit the EU and bring in socialism.

RMT Pickets Call For A General Strike To Win Their Pay Dispute!

‘Real value’ of pay in freefall