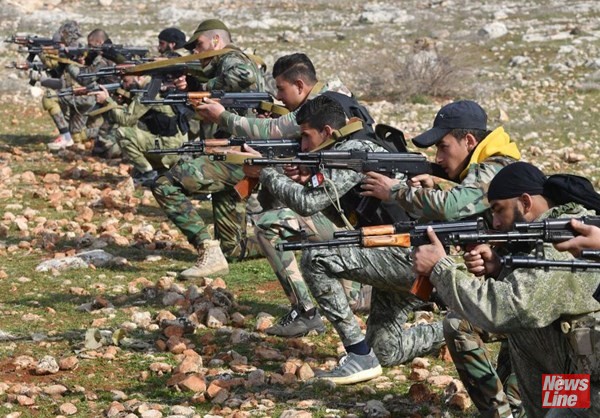 SYRIAN government forces have carried out a major mopping-up operation in the country’s southwestern province of Rif Dimashq, and have discovered a considerable amount of US and Israeli-made munitions left behind in the terrorists’ hideouts.

A field commander told Syria’s official news agency SANA that Syrian soldiers launched the operation in the town of Yalda, which lies on the southern outskirts of the capital Damascus, on Saturday to clear the area of hidden explosive devices and ordnance left behind by the militants.

Separately, Syrian army units foiled an attack by Takfiri terrorists on a military post in the country’s west-central province of Hama.

A Syrian military source, speaking on condition of anonymity, said Syrian troops engaged in a heavy exchange of gunfire with the extremists in al-SuqayLabiyah city, killing and injuring a number of them in the process.

Initial reports indicate that a number of Syrian soldiers lost their lives or sustained gunshot wounds during the clash.

Meanwhile, United Nations spokesman Stephane Dujarric said on Friday that international humanitarian agencies have ‘grave concerns over the fragile health of some 65,000 residents’ of al-Hol refugee camp in Syria’s northeastern province of Hasakah.

Dujarric said that more than 3,000 people, mostly women and children, had reached the camp from Daesh-held areas in the eastern province of Dayr al-Zawr the previous night, bringing the total population of al-Hol camp to more than 65,000.

‘Urgent funding is needed to ramp up the response, especially in the areas of shelter, water, sanitation and hygiene, health and protection services,’ the UN spokesman said.

‘There are grave concerns over the fragile health of the camp’s residents, with nearly 100 people having died since early last December en route to the site (or) shortly after arrival or referral,’ he pointed out.

Dujarric further noted that two-thirds of the people who had died were children under the age of five, with hypothermia, pneumonia, dehydration and complications from malnutrition being the main causes of death.

‘At least 243 unaccompanied and separated children have been identified in the camp, of whom 41 have been reunited with their families,’ he said.

‘The UN and aid agencies are scaling up their efforts at the camp, providing round-the-clock emergency health and protection assistance,’ Dujarric said. ‘All of the people arriving at the camp are receiving food, water, shelter, warm clothes or blankets.’

Syria has been gripped by foreign-backed militancy since March 2011 and the Syrian government has condemned the Israeli regime and its Western and regional allies for aiding the Takfiri terrorist groups who wreaked havoc in the country.

The Organisation for the Prohibition of Chemical Weapons (OPCW) announced on March 1st that, based on the findings of its inspectors, a ‘toxic chemical’ containing chlorine was used in clashes between the Syrian military and anti-government militants in the town of Douma, near the capital Damascus on April 7th, 2018.

‘The Syrian Arab Republic categorically rejects the conclusions of the mission team,’ the Syrian Foreign Ministry said in a statement carried by state news agency SANA on Monday.

‘The report was no different to previous reports from the mission, which were full of blatant distortions of facts.’

The statement also criticised the Hague-based OPCW for ignoring eyewitness accounts that terrorist groups had actually staged the chemical attack scenario themselves, with the help of the so-called White Helmets aid group – which has known ties to Britain.

‘In fact, what attracts attention now is that the authors of the report ignored the statements of eyewitnesses who experienced that incident and who described the allegations of chemical weapons being used in Douma as a “play” performed by the armed terrorist organisations themselves,’ it added.

Russia says many White Helmets members are still in Jordan after their withdrawal from Syria, because their Western sponsors are reluctant to resettle these so-called ‘volunteers’.

The Syrian statement also blasted the US, the UK and France for using the alleged chemical attack as a pretext to conduct aerial and missile raids in Syria ‘that destroyed scientific centres which included laboratories for peaceful purposes.’

It pointed out that Syria had provided the OPCW mission with all the necessary facilities hoping that it would make a logical and professional conclusion without giving in to political pressure from Western countries.

‘Syria calls on the member countries at the OPCW to uncover such fake reports which have no credibility, and calls upon the technical secretariat of the OPCW to appoint fact-finding mission members who are professional, fair and neutral,’ a spokesman said.

‘We will resist until every inch of Palestine is free!’ – message from London Nakba Day rally

‘The cold-blooded murder’ of Shireen Abu Akleh by an Israeli sniper!