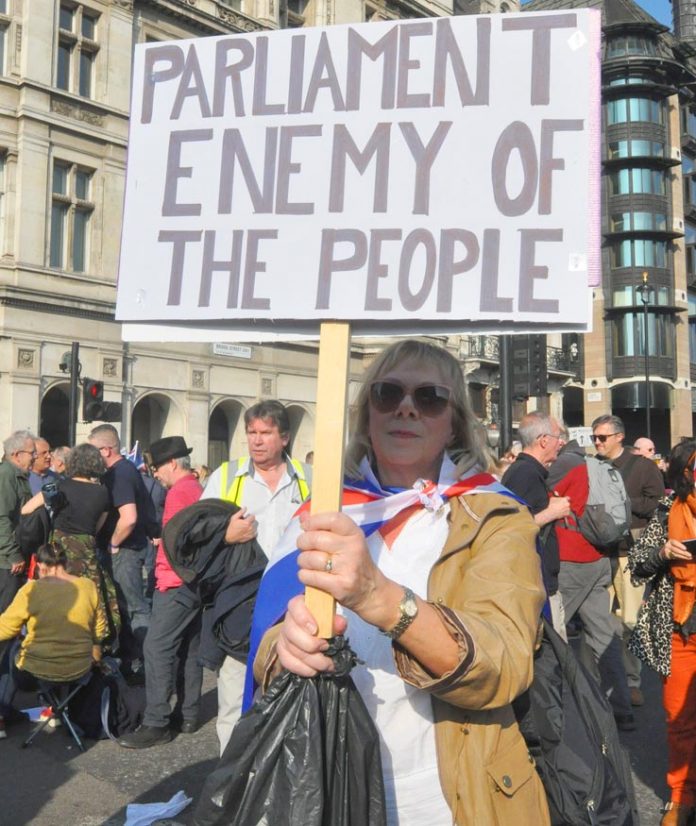 THE Former and completely discredited prime minister Blair, who took the UK into a war with Iraq that was based on lies and brought ISIS into the world, was yesterday issuing more threats as he urged Labour supporters who ‘can no longer vote for the party’ to vote for one which ‘unequivocally’ backs Remain.

He acknowledged a fear that those who feel strongly pro-Brexit may start ‘rioting on the streets’, but issued his own threat instead, that there would be a ‘silent revolution’ in the event of a no-deal Brexit.

Appearing on Sky’s Sophy Ridge Show, Blair said: ‘What I’m saying is, the important thing is to vote. So I do come across a lot of Labour people who simply can’t vote for Labour at the moment. In which case I say to them “don’t stay at home, go and vote for one of the avowedly Remain parties”.

‘What will matter is that at the end of this election there’s going to be a totting up, there’s going to be a ledger and on one side of the ledger there will be Mr Farrage and his fellow travellers like Boris Johnson and the Conservative Party and on the other side are going to be those that are anti that position, anti-Farrage, anti-Brexit, and it’s important that it’s not so much the seats, but the percentage of the votes.

He went on: ‘The point is this. In the end, when you look at the situation, you’re going to have this fundamental division in the country.

‘It’s not the same as the Scottish independence referendum because right now we’re deciding whether to do Brexit or not and the truth is, if we end up doing a hard or a no-deal Brexit, and I don’t believe we can really justify that by reference to the June 2016 referendum, particularly a no-deal Brexit, believe me, you’re going to get a revolution in British politics the other way …

‘But let me just tell you this. If we go ahead and tumble out of the European Union with a no-deal Brexit of the sort that Farage and Boris Johnson and these people want, you are going to get a silent revolution in this country as well.

Meanwhile, Brexit Party leader Nigel Farage told the Andrew Marr Show that there has been a breakdown in trust between people and politicians.

Farage said that if the Brexit Party is successful in the European Parliament elections, he will ask for the party’s MEPs to become part of the government’s EU negotiating team.

‘We’ve got a two-party system that now serves nothing but itself,’ he said.

‘There is a complete breakdown of trust between the people in this country and our politicians and frankly they revealed themselves to be grossly incompetent.’

Ahead of European elections, two separate polls – by ComRes and Opinium – give Farage’s Brexit Party the biggest share of the vote with the Tories in fourth place behind Labour and the Lib Dems.