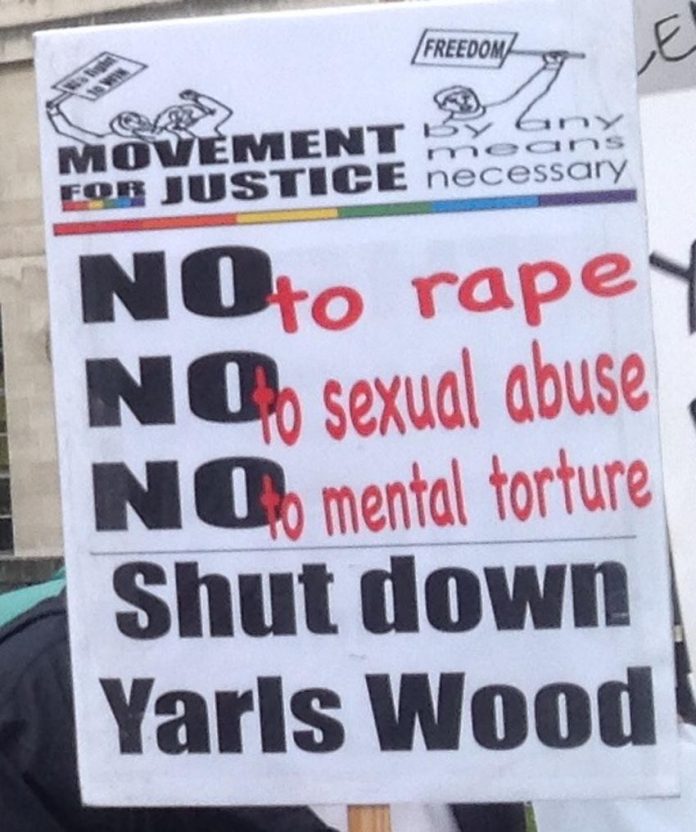 By: Clare Sambrook First published in Our Kingdom

WHAT is the government really doing to protect immigration detainees from their guards?

In Parliament on Tuesday 15 October, the Liberal Democrat MP Sarah Teather challenged the government to come clean about a sexual abuse scandal.

Male guards employed by the commercial contractor Serco have, allegedly, been sexually abusing vulnerable women in their care at Yarl’s Wood, the Home Office’s Immigration Removal Centre in Bedfordshire.

Teather, the former families minister, asked: would the Home Secretary ensure that Serco’s reports on the scandal were published? Would the Home Office investigate?

What procedures were there to protect women from sexual assault and harassment? And had the Home Secretary reviewed the policy of detaining women for immigration purposes?

How does the government’s reply stand up to scrutiny? Let’s take it apart.

Speaking for the government, the Tory immigration minister Mark Harper said: ‘Detention plays a key role in the maintenance of an effective immigration control.’

And: ‘We are committed to ensuring that all detained persons are held safely and that they are treated with dignity and respect.’

In fact detainees’ safety has been contracted out to commercial operators whose ethos and training has proved wanting, as demonstrated most dreadfully by the unlawful killing of Jimmy Mubenga, and in other more subtle ways every day on the detention estate.

At Yarl’s Wood, for instance, as a report from HM Inspectorate of Prisons reveals today, pregnant women are detained regardless of Home Office rules which say this should happen only in exceptional circumstances.

They see their midwives at Bedford Hospital. The Prisons Inspectorate said: ‘In two cases, female escort staff had inappropriately accompanied women into the consultation room.

‘One woman said that she had felt humiliated and was reluctant to attend any further hospital appointments as a result.’

So much for safety, dignity and respect.

Back to guards’ sexual misconduct.

The Minister ploughed on: ‘Bedfordshire police are investigating the allegations . . . and Home Office Immigration Enforcement is offering full assistance to that investigation.’

Far from ‘offering full assistance’, the Home Office forcibly deported alleged victims and witnesses. Several of them were put on a flight to Pakistan on 1st October 2013, as revealed here on OurKingdom.

Detention centre guards ‘undergo thorough security checks and complete extensive training before they are certificated to work with detainees,’ the Minister assured Parliament.

The Inquest into Jimmy Mubenga’s death heard that the Home Office casually handed open-ended dispensations to its contractors to allow unaccredited guards to carry on working.

The Coroner’s recent scathing critique of that arrangement is here in her Rule 43 Report.

‘There are strict rules governing interaction with detainees,’ said the Minister.

‘Any member of staff who contravenes any of the rules governing interaction, whether inside or outside centres, will face disciplinary action, which may lead to dismissal.’

That sounds tough. But today’s report from the Prisons Inspectorate found that when one detainee complained of ‘physical and verbal abuse’ by staff, ‘the matter had been investigated by an administrative assistant’.

The Minister assured Parliament and the public: ‘The use of CCTV cameras in the majority of public areas in IRCs (immigration removal centres) and in all vans used for escorting detainees provides an additional safeguard.’

Has nobody told him that Yarl’s Wood guards allegedly abuse their charges in the upstairs room set aside for asylum-seekers to take family photos? There’s a nice sofa, curtains, and no CCTV up there.

The Minister commended the formal complaints system. Never mind the Prisons Inspectorate’s observation that while detainees can submit complaints out of sight of their guards, the complaint boxes are not secure.

Perhaps optimistically the Minister claimed that detainees could even ‘contact the police direct to report an allegation of sexual assault or harassment’ if they wanted to.

Neither the formal complaints procedure nor independent inspection by HM Inspectorate of Prisons brought guards’ alleged sexual abuse to light.

That was down to one alleged victim’s persistence, a good lawyer – Harriet Wistrich, and a journalist, the Observer’s Mark Townsend.

‘All serious misconduct allegations are passed by the Professional Standards Unit of the Home Office to the appropriate authorities, such as the police or other oversight bodies,’ said the Minister.

Ah, the Professional Standards Unit. They’re the people who looked into the case of ‘Tanja’, the young detainee allegedly subjected to oral sex by one Yarl’s Wood guard.

They claimed she failed to indicate that the sexual contact was ‘anything other than consensual’.

Don’t they understand that the power imbalance between a uniformed guard, keys jangling at his belt, and a vulnerable young woman, newly imprisoned, is so extreme that it makes genuine consent on the part of detainees impossible?

The Minister said: ‘Detainees who are not satisfied with the way in which their complaint has been handled may ask for it to be reviewed by the independent prisons and probation ombudsman.’

Not if they’ve been disappeared to Pakistan.

As for publishing Serco’s reports into the matter, the Minister claimed that can’t be done – because of the Data Protection Act! That bit did make me laugh.

The government’s true commitment to women’s safety may be illustrated by one troubling story contained in today’s report from the Prisons Inspectorate.

A Home Office official decided that an unaccompanied child was an adult, so she was locked up in Yarl’s Wood, awaiting removal to Italy.

The girl had been distressed during interview and had mentioned a 25-year-old boyfriend. Following legal representations a social worker interviewed her and determined that she was indeed a child.

So, she was taken into care.

She disappeared. A man contacted social services to say that she had absconded because she didn’t want to go to Italy. The Home Office left it there. This girl has been recorded as an ‘absconder’ and not reported as a missing person to the police. The Home Office neither knows nor, perhaps, cares what has become of her.