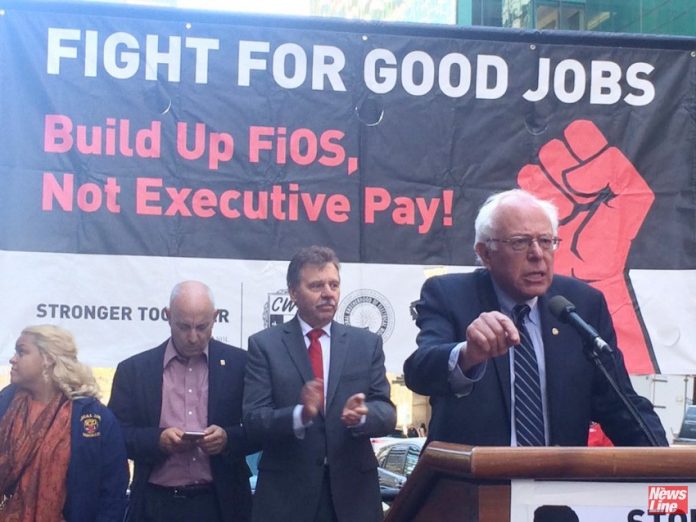 US SENATOR Bernie Sanders, who has said he intends to run the first unionised Presidential campaign in history, announced last Monday a policy proposal sure to resonate with that base: banning right-to-work laws.

‘When billionaires like the Koch brothers spend millions of dollars successfully lobbying for so-called ‘‘right to work’’ for less laws, they are waging a war on workers,’ the Vermont senator said at a Las Vegas speech to the International Association of Machinists.

Just more than half of US states currently have some form of law on the books banning unionised workplaces from negotiating contracts which require all members who benefit from a union contract from paying dues.

Premised upon the 1947 Taft-Hartley Act, such laws can now be found in 28 states and Guam, and they have spread with heavy lobbying from the US Chamber of Commerce and prominent Republican donors. ‘When we are in the White House, we are going to pass the Workplace Democracy Act that I will be re-introducing in the Senate,’ Sanders said.

The Taft-Hartley Act restricted the power and activity of labour unions, and the legislation backed by Sanders targets the statute within it allowing states to pass laws banning agency fees.

‘This year we have seen a right-wing think tank try to follow the disastrous Janus decision with another court case that could essentially impose right-to-work on the airline industry,’ Sanders told the machinists, who have been protesting nationwide for favourable terms in their ongoing negotiations with American Airlines.

‘In a Bernie Sanders administration, that will never, ever happen.’

The mandatory fees banned by the Janus decision had been allowed for more than four decades under the 1977 Supreme Court precedent Abood v. Detroit Board of Education, which Justice Samuel Alito overruled as a violation of the First Amendment right of association.

In a dissent, Justice Elena Kagan wrote ruefully: ‘The First Amendment was meant for better things.

‘It was meant not to undermine but to protect democratic governance – including over the role of public-sector unions,’ she wrote at the time.

President Donald Trump, however, celebrated that decision last July. ‘Supreme Court rules in favour of non-union workers who are now, as an example, able to support a candidate of his or her choice without having those who control the union deciding for them,’ he tweeted at the time. ‘Big loss for the coffers of the Democrats!’

Boasting a $28 million war chest, Sanders has touted his ability to fundraise based on small donors. His campaign reported that its average donation was $20, even more modest than the $27 figure that was his rallying cry three years ago, but the senator’s persistent delay in releasing a decade’s worth of tax returns has drawn scrutiny toward his finances.

Sanders has since promised to release those returns after the April 15 tax filing deadline.

Management at Stop & Shop presented their ‘final offer’ to their workers, which included significant cuts to healthcare, massive increases (over 100% in some cases) to workers’ health care premiums, and replacing wage increases with so-called bonuses. All in all, this represents a massive step backwards with many workers facing reduced weekly earnings if they agreed to their ‘final offer’.

On top of this, Stop & Shop’s parent company reported over $2 billion in profits last year. This is not the time to ask for concessions. Rather, this is a time to invest in the workers who have made Stop & Shop so successful and profitable  said the Connectticut AFL-CIO.

The news of the store closing came to a shock to locals in the midst of shopping – they had to leave their carts filled with groceries behind and exit the building.

The strike comes after failed negotiations with the grocery store. ‘Everyone knew this was going to happen because Stop & Shop has not budged. They don’t want to give any wages and they don’t care about the future of this company or the employees,’ one worker said.

A flyer being handed out by workers reads: ‘Stop & Shop is aggressively trying to slash workers’ take-home pay, health care and retirement security which will increase turnover and dependence of self-checkout and other technology.’

According to several of the Stop & Shop employees the last strike happened in 1989 and lasted 17 hours. ‘Our teamsters are backing us 100% which means (there) will not be any deliveries to any Stop & Shop,’ one employee said.

He added: ‘As far as Peapod, we were told that they are part of a different union so the drivers will be out on-road but their trucks are likely not carrying groceries because the Stop & Shop employees are on strike.’

Just some of the things  Stop & Shop employees were saying as they stood outside of the grocery store:

‘We just want a fair deal.’

‘The way the cost of living in Fairfield County increases, they can’t freeze wages. It’s not right.’

‘Actions speak louder than words. That’s why we’re out here.’

‘We want a fair contract.’

Several hundred teachers marched on the sidewalk along 47th Avenue, rallying cars to honk their horns in support of their strike, and hundreds more filled the parking lot enjoying free meals and listening to live music.

Teachers from various Sacramento schools changed popular song lyrics to ‘you, teachers, are my sunshine, my only sunshine’ and ‘lean on me’ as teachers erupted in cheers.

‘This is extraordinary: we have to be here 16 months later just to get the district and superintendent to keep their promise,’ Sacramento City Teachers Association President David Fisher said.

Fisher mentioned a 2017 agreement between the union and school district brokered by Mayor Darrell Steinberg. His reference to the mayor was met with loud boos from the teachers.’

Hope Dennis from Parkway Elementary School took to the stage to sing to hundreds sitting in the parking lot with their picket signs. Dennis moved to Sacramento from Tennessee three years ago and teaches a 4th grade class with 33 students.

‘We need to make sure we reach and teach every child every year,’ Dennis said. She went from teaching 25 students in her 2nd grade class to 33 students this year in her 4th grade class.

Reducing class sizes has been one of the main rallying cries for teachers as they hold their one-day strike.

‘I hope we are an example to students to always fight for what they believe is the right thing to do,’ Dennis said.

Several teachers and union members from various districts came to support Sacramento teachers. Members were on hand from the United Teachers of Los Angeles and Oakland Educators, who were on strike in January to ask for raises and smaller class sizes.

‘I bring you greetings from 35,000 members from our teachers who stand with you in solidarity,’ said Cecily Myart-Cruz with UTLA.

In January, teachers in Los Angeles went on strike for six days to fight for a new contract. They are waiting for the new contract to be implemented.

‘Look at how many teachers across the US are winning the fight, and this is the way to do this,’ said CNA representative Diana McClure.