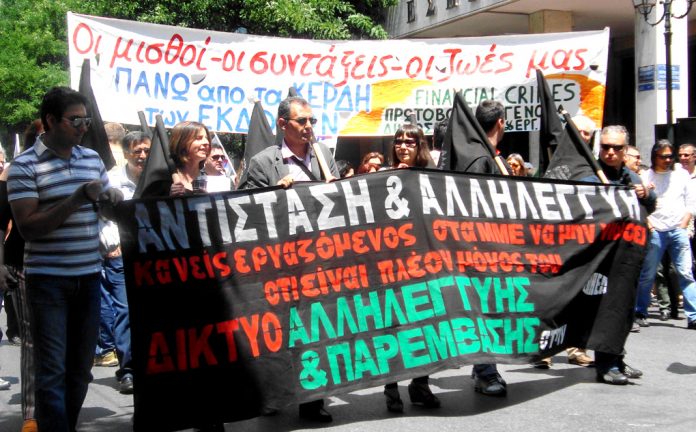 Media workers demonstrated through Athens city centre with the most popular slogan shouted being ‘for a general and indefinite strike’. But the journalists’ trade union leader, Dimitris Trimis, refused the call and said that the best thing to do is to sit down with the bosses to find a solution.

On June 6th journalists are holding a ballot on the issue of declaring an indefinite national strike. During the last six months one national newspaper and one nationwide tv channel have closed down along with dozens of magazines.

It is estimated that the media sector’s unemployment has reached over 40 per cent while those who are still at work have their wages cut by 20 to 40 per cent and others have not been paid at all for the last three months.

The Athens bourgeois press have revealed that ex-prime minister and banker Lucas Papademos handed a document over to the Greek President on 11 May outlining Greece’s bankruptcy. In it Papademos claimed that at the end of June Greece won’t have the necessary cash to pay wages and pensions.

The document is being used by the press against the Coalition of the Radical Left party (SYRIZA) which is being accused as responsible for the eventual exit of Greece from the euro.

SYRIZA’s leader Alexis Tsipras replied that it is the EC-IMF Austerity Measures Accord that is dragging Greece over the cliff. SYRIZA are to present their political programme this Friday. But Tsipras’ recent pro-EC and pro-euro statements have produced a noticeable decline in the support for SYRIZA.

This so-called recapitalisation of the four biggest bankrupt Greek banks was carried out through the Hellenic Financial Stability Fund (HFSF), itself funded by the EC-IMF bailout fund, obviously in agreement with all the major political parties including SYRIZA.