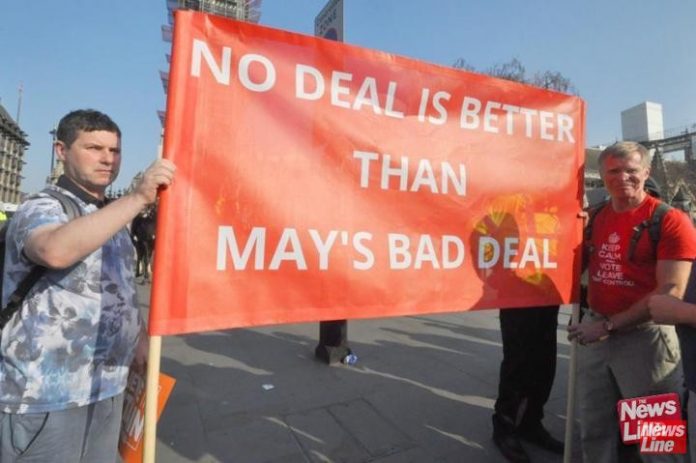 ON FRIDAY, PM May wrote a grovelling surrender letter of complete capitulation to the EU President Donald Tusk, in which she agreed that the UK would undergo a process of national humiliation by taking part in the May European elections, and that she would even respect a parliamentary majority vote to remain in the EU.

On the European elections, she writes the UK government is already ‘undertaking the lawful and responsible preparations for this contingency, including by making the Order that sets the date of the poll’.

‘The House of Commons declined to approve the Withdrawal Agreement and take up that option. Therefore unless we agree a further extension at the European Council you have convened for 10 April, the United Kingdom will leave the European Union without a deal at 2300 BST on 12 April 2019.

‘The Government’s policy has always been and remains to leave the European Union in an orderly way, and without undue delay. The House of Commons has not thus far approved the deal that would enable this, nor — despite considerable efforts by both Members of Parliament and by the Government — has it yet found a majority in favour of any other proposal.

‘The House has, however, continued to express its opposition to leaving the European Union without a deal. The Government agrees that leaving with a deal is the best outcome.’ (Our emphasis)

Signalling a further surrender, May adds: ‘This impasse cannot be allowed to continue … That is why the Government has decided to take further action to seek a consensus across the House of Commons on the right way forward.

‘I therefore met the Leader of the Opposition earlier this week to discuss whether we might be able to agree a proposal that can be put before the House of Commons which allows the United Kingdom to leave the European Union with a deal.

‘We agreed follow-up discussions that are now taking place. I have also extended an open invitation to Members of Parliament more broadly to work with me to achieve a consensus that respects the result of the 2016 referendum.

‘I am clear that all of these discussions need to be based on acceptance of the Withdrawal Agreement without reopening it, as the United Kingdom agreed with the European Council at our last meeting, and should focus on the framework for the future relationship between the United Kingdom and the European Union. If a consensus is going to be found, compromise will be needed on all sides, in the national interest.

‘If the talks do not lead to a single unified approach soon, the Government would instead look to establish a consensus on a small number of clear options on the future relationship that could be put to the House in a series of votes to determine which course to pursue. The Government stands ready to abide by the decision of the House, if the Opposition will commit to doing the same.’ (Our emphasis)

She is giving a further incentive to the Remain campaign to keep on fighting, pledging that she will capitulate to Parliament’s Remain majority and scab on the 2016 referendum!

It is to be game set and match to the Remainers, and the complete sell-out of the 17 million plus ‘Leave’ voters.

Schoolchildren to be served smaller portions!