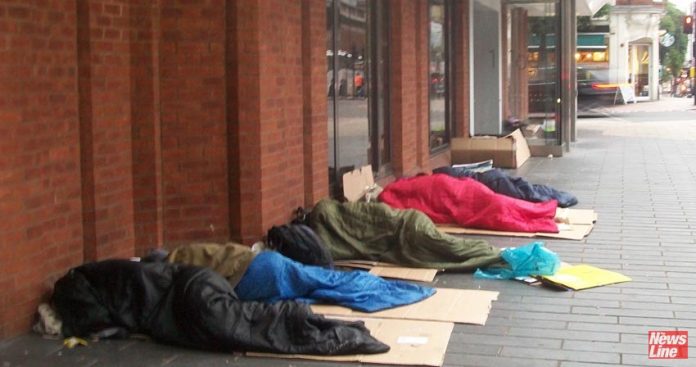 THE NUMBER of homeless people dying on the streets of England has dramatically increased by 25% over five years, while the sheer scale of rough sleeping has increased by 165%, charities warned yesterday.

They point to savage cuts to homelessless support services at the hands of this Tory government amounting to an average of £590m a year or over £5bn since they came to power in 2010.

This, the charities warn, has left a supermassive black hole in funding leaving homeless people with nowhere to turn.

Howard Sinclair, chief executive of St Mungo’s, said: ‘The human cost of these cuts is all too real.

‘The people we work with – many struggling with poor mental health, substance use or domestic violence – are often being left with no option but to sleep rough.

‘With nearly 600 people dying on our streets or while homeless in a year, this really is a matter of life and death.’

Rick Henderson, chief executive of Homeless Link, a charity which represents those working in homelessness and the housing sector, said: ‘There are too many people sleeping rough and facing homelessness in this country – we can see it every day on our streets and it is unacceptable.

‘Local authorities have a key role in supporting people who are homeless, or at risk of homelessness, but they can only do so if they have enough money to fund services properly.’

Meanwhile, Labour has pledged to end slum office housing. This is in response to a scheme where families are decanted out of big cities and re-housed in disused office blocks on the very edge of towns far from any shops or schools.

In one such scheme families were rehoused in tiny box rooms at Newbury House in Ilford, an office block that has been turned into 60 flats measuring just 13 square metres each.

There are literally hundreds of these blocks around the country.

Terminus House, in Harlow, Essex also has families crammed into single rooms, with children forced to eat, sleep, drink and do their homework in bed.

In the first 10 months of Terminus House opening, crime rose by 45% in the car park which sits beneath the block.

Labour says it would scrap the government scheme that allows offices and industrial buildings to be converted into homes without planning permission.

The party said changes to permitted development rules in England had led to the creation of ‘slum housing and rabbit hutch flats’.

Rising prices ‘are a price worth paying’ says Johnson