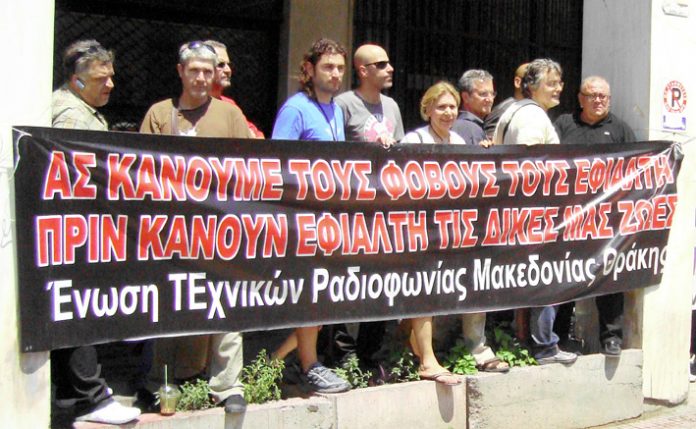 About 100 Greek radio and TV technicians and journalists gathered outside the building of the Ministry for Labour in central Athens at midday on Thursday (right) protesting against a new Bill by the Minister for Labour Loverdos which annuls and make unlawful already signed collective agreements which include pay rises for this year.

Two weeks ago the employers and the GSEE (Greek TUC) signed a three-year collective agreement for workers in the private sector which does not allow pay rises this year and only 1.5 per cent rises in 2011 and 2012.

Inflation is running presently at 5.4 per cent annually in Greece.

After the meeting with a Minister’s aide, the technicians’ and journalists’ trade union leaders announced no progress, but a meeting was set up with the Minister next week.

He called on all workers to be ready for a fight because ‘this is a hot Summer and an even hotter Autumn is coming up so we must be prepared for a long fight’.

Plan to ‘Fire and Rehire’ 100 teachers at Richmond College