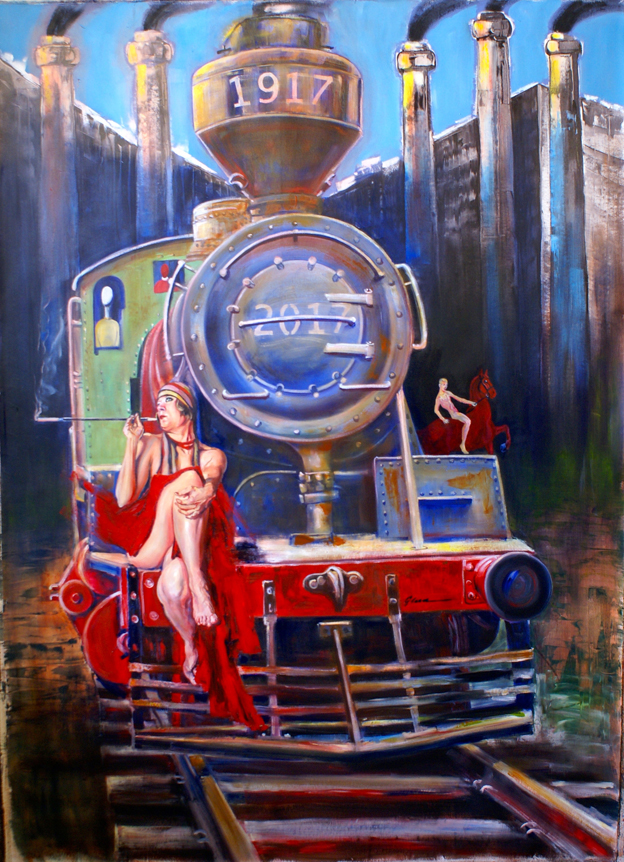 HURRY to catch the ‘Art of Revolution’ exhibition taking place in Norwich, dedicated to the 100th anniversary of the Bolshevik Russian Revolution. It explores its significance and cultural legacy. The venue is the Undercroft, St Peters St, Norwich – an excellent underground site at the top of Norwich market. The exhibition runs up to 14th October.

The curator of the exhibition is local artist, Gennadiy Ivanov. Interviewed by News Line, he said: ‘Twenty nine artists are exhibiting. I decided to concentrate on the Russian Revolution. Others are talking about revolutions in other spheres such as the industrial revolution, design, movies, art. I invited other artists to take part and asked them to add some red.

‘I was born in Russia from a military family and lived in far East, then near Moscow, moving to near the Volga river and finally to Belarus. I have been in Britain 15 years and have a small studio on Upper Giles St. It is important to commemorate the Russian Revolution. It had a very important historical impact. If you don’t know your history, you don’t know your future.

‘We need to shake the marshes; to wake people up and get them to think about what is going on. It’s not just enough to think about food and joy, to sit on the sofa eating chips and being entertained, but to think about the world and what they want to change.’

Ivanov recalls the mutiny of the sailors on the Battleship Potemkin: ‘The Russian people became very political during the revolution. And they are becoming very political now. Everything is going in a circle. Russia and China have huge resources. It was Madeleine Albright who suggested that all Russian resources don’t belong to them but belong to the world and we should have it.

‘Russia is ringed round with military hardware pointing in their direction. I hope this exhibition inspires visitors to think about what they want to change, and they’re looking to the future.’

The exhibition is exciting. Gennadiy is a talented naturalist painter who enjoys using thick oil paint in bright colours. His paintings are powerful and vibrant. He loves the human body and many of his pictures are of people or portraits. Paintings show the faces of Lenin, Che Guevara, Castro, Frieda Kahlo, John Lennon, Mayakovsky and Yurio Gagarin, looking out of his spacecraft, ‘a window on the universe’.

There is a huge painting of a locomotive, a metaphor for revolution, driving straight towards you, with a young woman sitting on the right of the buffer and an image of a young boy riding forward on a horse to the left. On the funnel of the engine is written 1917 and on the front of the train is written 2017.

There are paintings of red sailors fighting, joking, giving the thumbs up, or dancing. One painting focuses on a sailor’s rugged hands. Another painting shows a beaming young woman, in front of a flowing red banner, and the words, ‘Every cook can govern.’

Leon Trotsky is referenced in a large canvas showing an enthusiastic young woman calling out to the world, to transmit the huge reverberations of the revolution globally. There is a statue of a young woman by another artist, which touches on the psychological changes that take place in the people during a revolution, from humiliation to pride, from fear to courage. The downsides of capitalism are alluded to in the portrayal of Coca-Cola cans.

The constant anti-socialist reports of the bourgeois media are exposed in a series of articles stuck on a wall, with comments exposing their hostile intent. These include ‘the anti-Soviet message of the Bond film From Russia with love’. There is a moving depiction of the Industrial Revolution, showing a starving child. There are very many other constructions and paintings and styles.

Deanna Tyson, a Cambridge artist chose as her topic revolutions of the sixties from the cultural revolution and the ideas of Michael Foot. She made a large decorative Revolutionary Rug inspired by two recent exhibitions, one at the V&A museum, ‘You say you want a revolution?’

Records and Rebels 1966-1970, and the Revolution: Russian Art 1917 to 1932 at the Royal Academy. The latter exhibited Nikolai Denkov’s ‘kerchief’ with the portrait of Lenin in the centre and Trotsky’s corner portrait cut out.

Her rug showed Che Guevara in the middle, and Angela Davis, Mohammed Ali and Judy Chicago at three corners and a hole where Bob Dylan’s face was cut out. She said he was the villain of the piece for not turning up to receive his Nobel prize in person. She stresses the importance of other media apart from formal oil paintings. For her, textiles are important.

She has created a statue of a woman in a beautifully made white gown and burka, from Syria. She says pretty alluring things can attract, but when you look into them they are much darker.

Round the bottom of the dress are listed the sinister weapons being used in the wars in the Middle East.

Another work draws attention to the shoes that were thrown at the invaders in the Iraq war, a sign of opposition from the people. This is a stimulating, and unusual exhibition commemorating the Russian Revolution of 1917 and other revolutionary changes in society. Not to be missed.

73 Years Since The Deir Yassin Massacre!