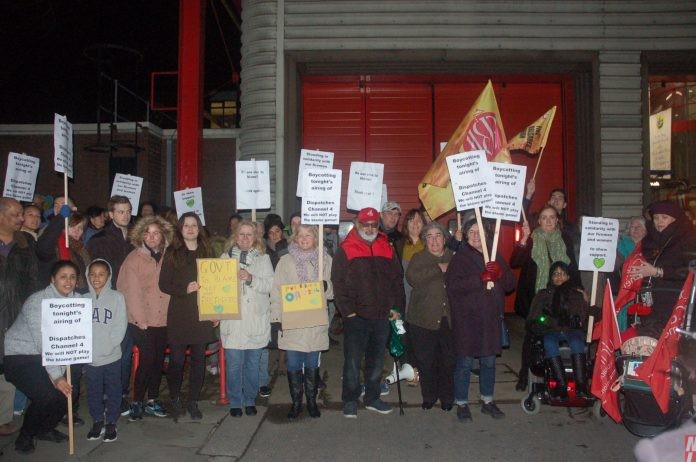 A MASS protest in support of the fire service took place outside Ladbroke Grove fire station on Monday night, by residents who live in the surrounding area to the Grenfell Tower fire.

Community activists and campaigners demanded the boycott of Channel 4’s extremely controversial documentary ‘Dispatches Grenfell: Did the Fire Brigade Fail?’ which was being aired at the same time as the protest.

Cars tooted their horns in support as the campaigners massed outside the fire station.

Young worker Adam Echhaibi told News Line: ‘I am here to show support for the firefighters. They should not be made a scapegoat for the Grenfell Tower fire. They are not to blame. They did not make the decisions around Grenfell Tower.

‘The renovation, when the Tower was clad, helped spread the fire. All flammable cladding must be banned.  It has already been banned in Australia, but not here.’

Local resident Ken said: ‘It is outrageous they are trying to make a scapegoat out of the firefighters.

‘The cladding played a large role in accelerating the fire. I am disappointed that no one has been brought to justice yet.

‘If this had happened in the richer part of Chelsea heads would have rolled. This is a big cover-up.’

Raj Gill, branch secretary of the local Unite Community branch said: ‘We are here to show solidarity with the firefighters and the Fire Brigades Union (FBU).

‘The media are trying to witchhunt and blackmail the firefighters. The government and the local government are responsible.

Local Labour MP Emma Dent Coad said: ‘We are 100% behind the fire service. There must be no trial by media.

‘If after the Lakanal House fire they had implemented the results of the investigation then all buildings would have been retro fitted with sprinklers.’

Commenting on the programme, Matt Wrack, FBU general secretary, said: ‘We are united in our quest for justice over the tragic events of 14th June 2017.

‘We have never been afraid of criticising individual fire and rescue services, and in our view, London Fire Brigade has questions to answer on their preparation for a fire such as this.

‘However, this is a national issue that demonstrates national failings; it is the failure of Ministers to monitor and address national safety issues. This is not solely a London issue, there are hundreds of high rise buildings across the UK with similar cladding as on Grenfell Tower, and therefore it requires national oversight and intervention from government.

‘The building owners, the local authority, the politicians, their advisors, the very people who have allowed public safety to be undermined over decades, need to be held accountable.’

These include water-soaked electrics, severe damp and black mould with  lifts constantly breakingdown.

Clyde House is a block of social housing, with 62 flats over eight floors, built as part of a private housing development in Wandsworth, close to the River Thames.

At an angry and at times chaotic meeting on Monday, many residents spoke of flooding from cracked pipes, light fittings filled with water, vermin, a pervasive smell of sewage, a lack of hot water, exposed and sparking electrical wires – and frustration that their complaints have been ignored.

‘LAST FRIDAY IT WAS LIKE WAR ON THE STREETS OF PARIS’...

Million-man march today to expel all US troops from Iraq –...

Israel Is Blocking Gaza Gas And Selling It To Egypt

South African Telkom to sack 20% of workforce – executives getting...

News Editor - 24th January 2020
0
IRAQIS are joining a ‘million-man march’ against the US today as anger soars over a...