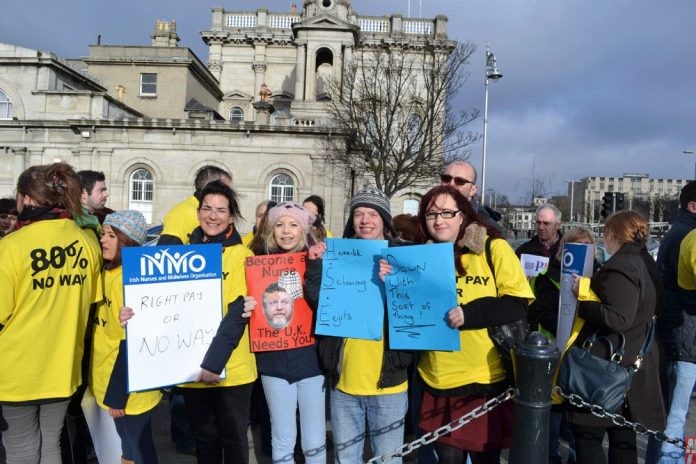 MORE than 150 trade unionists have signed a declaration calling on the labour movement to advocate for a united Ireland and a new all-Ireland constitution with workers’ rights at the heart of it.

The new movement called Trade Unionists for a New and United Ireland or TUNUI, includes a number of union general secretaries from across the island, and Liz Deasy and Karen Gearon, veterans of the Dunnes Stores anti-apartheid strike in 1984.

A declaration signed on Monday said it was ‘critically important that the interests of workers and working families are put at the heart of a new Ireland, which should be a united Ireland.

‘This must be a new Ireland that puts workers’ rights, economic rights, gender rights, as well as universal human rights front and centre in a new all-Ireland constitution,’ the document added.

The signatories call on trade unionists across Ireland ‘to begin engaging in the debate for Irish unity’.

‘Profound social and constitutional changes have taken place across this island in recent years and the debate about future arrangements has already started,’ they said.

‘As trade unionists working on both sides of the border, we believe it is critically important that the interests of workers and working families are put at the heart of this debate.

‘If there is to be a united Ireland, it must be a new Ireland that puts workers’ rights, economic rights, gender rights, as well as Universal Human rights front and centre in a new all-Ireland constitution,’ the declaration states.

Spokesman and trade union official Ruairí Creaney said: ‘The debate on the future of Ireland north and south has been escalating significantly against the backdrop of Brexit and the rise of populist right-wing, and borderline fascist, movements in the United States and in a number of EU member states.

‘It is now time to get it out in the open, and to ensure that the voice of trade unionism is to the forefront.’

Meanwhile, Irish trade union Siptu has said that its nursing and midwifery members will vote on the recent Labour Court recommendations only after the full details of the new contract are negotiated.

The decision was made following a meeting at the beginning of the week of the Siptu Nursing and Midwives sector committee.

Siptu Health Division Organiser Paul Bell said: ‘Our national committee confirmed that any ballot on the recommendation will not proceed until all aspects of the revised contract are concluded with the employers.

‘Ultimately, we believe that our members must have the final say when it comes to any change to terms and conditions.’

Following strike action by the Irish Nurses and Midwives Organisation (INMO), the Labour Court issued recommendations to resolve the issue which included a pay hike for nurses as well as an increase to some allowances.

The INMO called off the strike action and decided to back the recommendations subject to further negotiations.

Members of the INMO will be balloted between March 11 and March 25 on the recommendations.

Nurses and midwives who are members of Siptu did not take part in the strike action along with their colleagues.

Siptu nursing sector organiser Kevin Figgis said: ‘The specific details of this contract are to be negotiated over the next number of weeks.

‘Having fully considered the recommendation, it was the view of the committee that such an important adjustment to terms and conditions requires the establishment of the full facts so that members can be best positioned to vote in a ballot to accept any proposed changes.’

It is estimated that this new nursing pay deal, along with a deal negotiated with the Psychiatric Nurses Association, would cost the government 35m euros in a full year.

At around 6pm last Monday, around 50 delivery drivers gathered at Barnardo Square on Dame Street beside City Hall after attempting to meet company representatives.

A number of drivers arrived later before dispersing at around 9pm.

Duarte, who has drawn up proposals to discuss with the company, said: ‘We cyclists had a meeting on Monday to put together all opinions and what … we needed to approach Deliveroo about. We’re going too far for too little.’

Among Deliveroo driver concerns are the distances travelled for orders and length of time spent waiting to collect orders from restaurants in Dublin.

When an order is placed on Deliveroo, delivery drivers are given an estimated time for food to be ready at a restaurant.

‘But we only get to see this time when we get to the restaurant,’ says Duarte. ‘So, we can be waiting 20 minutes after the food should be ready.’

‘We’re losing money because of this. We’re not earning,’ says Duarte, who says that Deliveroo refused to engage with driver representatives this afternoon when they arrived at the company’s offices on Flemmings Place.

This would equate to a 7.75% pay rise over three years.

If accepted, the increases would take effect from January this year.

The Labour Court also recommended that Saturday working should be to suit customer and timetable requirements and that the company should roster work in each depot in a fair and equitable manner.

The court ruled that Sunday working should be on the basis of two in five or three in five at out-based locations.

It said this should be reviewed after six months against cost and operational considerations.

The Labour Court recommendation also says that any proposal regarding accrued annual leave should be dealt with through normal procedures in a format that encompasses all affected employees including drivers.

NBRU General Secretary Dermot O’Leary said: ‘Whilst our members will make the final decision regarding this recommendation, the Labour Court has to be commended for acknowledging that our members have made a major contribution in dragging Bus Éireann back from the brink of a scenario where those in officialdom were determined, in 2017, to drive this once-proud national transport carrier over the cliff of financial ruin.