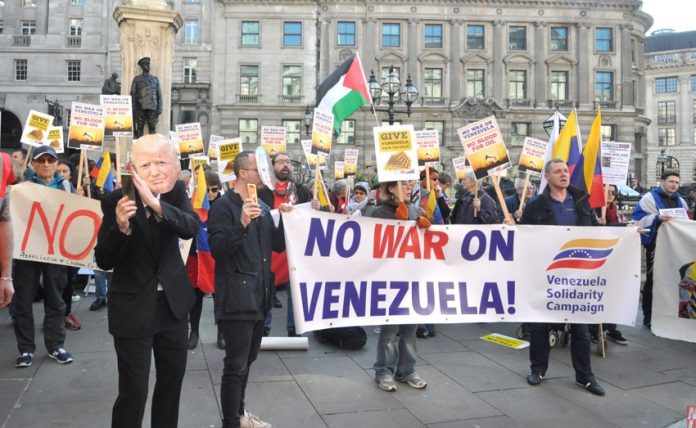 A DEMONSTRATION of over 100 people gathered outside the Bank of England on Saturday as part of a global day of action to demand: ‘No War on Venezuela’ and to demand that the BofE hand back the $1.3bn worth of Venezuela’s gold that the bank is holding.

‘It is an act of piracy,’ said Venezuelan journalist Carolina Graterol, at the protest.

‘It is a completely illegal action by the Bank of England. Venezuela has never waged a war against another country, in fact we have helped to liberate six nations,’ she continued.

Also at the protest, Alberto Zelda from the Colombian Congress of the People said: ‘I am concerned that the war for oil will spread to Colombia and throughout the continent. I am ashamed of my right wing government which is a puppet of the US, and its role in the war on Venezuela. The economy has been strangled and the US aim is to do what it did to Allende in Chile.’

Victor Ramirez, from the Ecuador Movement in the United Kingdom (MERU) addressing the demonstration outside the Bank of England said: ‘This is just the beginning of the struggle. We support the government and the people of Venezuela and are telling them that they are not alone.’

Ken Livingstone, former Mayor of London, who   invited the late Venezuelan President Hugo Chavez over to London, addressing the crowd said: ‘Day after day, all we are seeing is attacks on Venezuela.

‘They are demonising Chavez, When he came to power there were 200 super rich families who had ruled for generations. It didn’t matter who won the elections – those families controlled the politicians – not too dissimilar to here in the West.

‘He actually introduced free healthcare. He ended illiteracy which had been endemic throughout Venezuela and he introduced affordable medicines and food.

‘A quarter of a million Venezuelans were blind because they had cataracts and they had their sight restored without having to pay a penny.

‘But he didn’t just look after his own people, he gave £9bn pounds to other Latin American countries struggling with poverty.

‘When he came here to London in 2007, his safety wasn’t guaranteed because Tony Blair had ordered the police not to provide protection for him, in the hope that he wouldn’t come.

‘Fortunately as mayor I had some say over the police as I had appointed the commissioner and I made sure that decision was reversed so we could provide protection.

‘The legacy of his visit is the fact that he gave City Hall £14m so we could cut by 50% the fares for people on benefits – that was bloody wonderful. And it was Maduro who was the minister responsible for negotiating and dealing with me and my staff for delivering that.

‘I have not seen a single  one of these things mentioned in the media in the months and months of hostility that we are seeing.

‘But we need to look at the current situation. We are told Venezuela’s economy is in a mess because Maduro is no good as a President.

‘There’s two key factors that have damaged Venezuela’s economy. One is the collapse in oil prices and don’t forget Venezuela has the largest oil reserves of any nation on the face of the planet, and falling oil prices is bound to have a big impact on the government.

‘Then we have to ask what has America been doing to Venezuela’s economy with illegal sanctions?

‘But it’s not just Venezuela. America’s has sanctions against Iran and Nicaragua. All of these are illegal under international law. So why doesn’t our government stand up to them. The sanctions are absolutely bloody appalling.

‘So the simple fact is, when Chavez came to power he increased the taxes on the oil companies, BP, Shell and Exxon from 16% to 30% – hardly revolutionary – not like the good old days of the Attlee government where the richest were paying 98% tax.

‘But immediately we had a situation where the Assistant Secretary of State of the USA, Otto Reich had a secret meeting with Venezuelan billionaires and in the weeks that followed you had the 2002 military coup which actually looked as though it was going to overturn everything that Chavez had done.

‘The interesting thing about that is that the military were worried that the coup might not stand and it might be overturned  and so they didn’t kill Chavez.

‘But what happened was three Americans, presumably from the CIA, were flown into Venezuela to kill Chavez. I know this because he told me personally as we were having a cup of coffee after our financial deal.

‘And he was confined to a room where an army sergeant, who was armed was controlling him. As the three Americans walked into the room, that sergeant realised that they were not just going to kill Chavez, but they would most probably kill him because they wouldn’t want a witness to that assassination so he turned his gun towards the three and said: “Leave the room or I am going to kill you”. So without that sergeant, Chavez would have been killed by America, and I don’t believe for one minute that was just rogue elements.

‘But this is not new. Eight American presidents authorised the murder of Fidel Castro and bizarrely the CIA actually were liaising with the mafia to help organise those assassinations.

‘There are sixteen instances since the end of Second World War where  the United States has intervened to overthrow governments it didn’t like.

‘It’s not about democracy because almost all of them were democratically elected. Like Iran in 1953, overthrown by an American-backed coup, and Haiti and all across the world it’s gone on. It’s never been about democracy. It’s about America being able to rip-off the economy of the world. It’s giant corporations making hundreds of billions whilst around the world people live trapped in poverty. That’s what Chavez was, and Maduro is, fighting against. That’s why we should stand with them. And that’s why the British government should do nothing to comply with US sanctions, and no Bank of England should be doing anything to undermine the Venezuelan economy.’

At the demonstration Isabel Cortes, from Chile, told News Line: ‘I arrived in this country at the age of five from Chile with my family as political refugees.

‘What is happening in Venezuela is what happened in Chile – US intervention and economic war. What the US is doing is not democratic. This Guaido is self-appointed.’

Maria Vasquez, also from Chile said: ‘We have been here before. The media propaganda, the economic blockade and the so-called “humanitarian” mission are  trying to show that Venezuela can’t sort out its own problems and needs external i.e. US intervention.

‘This has nothing to do with human rights and democracy. It is about gaining control of the whole region and its oil.’

Cheryl Sanchez from Trinidad told News Line: ‘I’m here to support Venezuela’s sovereignty and their right to have their gold. They need trade not aid and the lifting of sanctions.

‘Branson’s aid is a pretence. Venezuela is receiving  tons of real aid, including medicines from Russia and China. Even the Red Cross does not support the US political aid.’