Home Features Mine disasters in Zimbabwe and South Africa –linked to the growth of...
Facebook
Twitter
WhatsApp
Email
Print 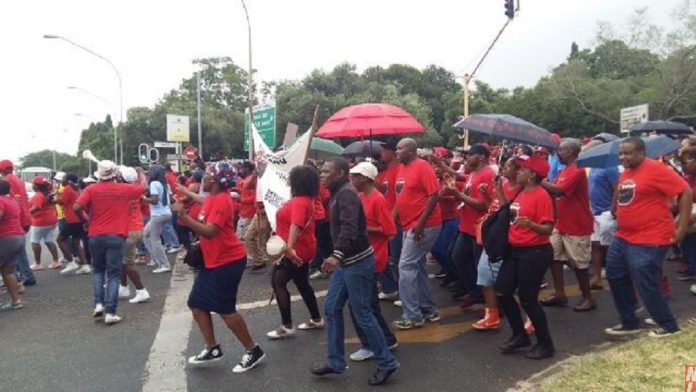 THE South African Federation of Trade Unions (SAFTU) is ‘deeply shocked and saddened’ – its leaders have announced in a new statement – at the tragedy in Zimbabwe in which at least 24 workers have lost their lives.

The disaster happened at the Kadoma mine after a dam burst and flooded nearby mine shafts.

It occurred ‘in two disused mines which were flooded – and between 60 and 70 “artisanal” miners were trapped in two shafts.

‘Eight survivors have been rescued, but this means that another 38 are still trapped underground. In a clip posted on Twitter, one survivor told journalists that the waters had risen to neck level, forcing them to stand for days until it receded.

‘This tragedy coincides with a similar potential disaster in the Gupta-owned Gloria mine in Mpumalanga, which was rocked by an underground gas explosion on 6th February, when a group of people had entered it allegedly to strip copper cables underground.

‘Twelve people have been confirmed dead, while it is still unknown how many remain trapped. An SAPS spokesperson says that “It is no longer a rescue mission, but it is a retrieval mission”, implying they had little hope of finding any more survivors.

‘SAFTU sends a message of condolence to the families of the deceased in both disasters and best wishes to the survivors for a full recovery.

‘The two tragedies are linked to the growth of ‘‘artisanal’’ or ‘‘illegal’ mining’’, by poverty-stricken unemployed workers, many of them former mine workers, who are so desperate to earn money that they risk their lives in dangerous mines.

‘They are then super-exploited by middle-men who pay a pittance for the minerals they extract and who then make big profits on the booming black market for minerals. The workers also face the constant threat of being arrested.

‘In both countries this is a symptom of high unemployment. South Africa is among the six countries with the highest unemployment rates, of 37.0%. In Zimbabwe the official figure is lower – but only because subsistence farmers are classified as “employed’’.

‘If all workers in informal employment are added to the unemployed, it comes to a staggering 95%, according to a report in the New York Times.

‘SAFTU does not condone any genuinely criminal activity in the mines, but a whole category of people cannot be categorised as “illegal workers”. It is an attempt to shift the blame for problems on to the shoulders of the victims rather than the real culprits – the dealers who exploit these workers.

‘None of these workers would choose such a dangerous and insecure way to survive if there was any chance of a secure job. They are part of a growing army of casualised workers who will accept any chance to scrape a living.

‘In South Africa they are part of the 76% of workers who are not members of any trade union, but are in the greatest need of one.

‘SAFTU demands that they should be officially employed by the state in a nationalised and democratic mining utility, integrated into the mainstream workforce, trained, given work in a safe and healthy environment and paid a living wage.

‘The federation, as part of its drive to organise the unorganised and marginalised, has identified them as a priority for recruitment into unions, so that they can fight for their rights under the constitution and labour laws, to find secure and to have decently paid work and human dignity.’

The department said it was committed to resolving the issues amid the union’s threat to continue with its industrial action on Monday.

Nehawu this week said it will not back down on its demands for the introduction of a new salary dispensation, better working conditions, the transfer of all college-paid lecturers into the Persal system and the removal of the director-general, Gwebinkundla Qonde.

Nehawu spokesperson Khaya Xaba said the strike will continue indefinitely until their demands are met, adding that the union declined to meet with the minister as they were allocated only an hour.

‘Yes a meeting was requested by the minister but was declined because they allocated us an hour to resolve all issues,’ said Xaba.

Meanwhile, lecturers said little had changed since they registered their grievances.

‘Nothing has changed since we moved. Only the status changed; we are now lecturers but when it comes to salaries and the conditions of employment, nothing has ever changed,’ said Nehawu branch chairperson Themba Plaatjie, adding that they were ‘fed up with working under the uncertainty of being contract workers with no benefits and stability.

‘Lecturers don’t have benefits, medical aid. Most are hired in what we call ‘‘instructional hours’’, which means you work for 2 and 4 hours. How do you pay someone what is not even equal to the minimum wage?

‘We are not entitled to pay progression and ‘‘13th cheque’’. When a lecturer is sick, they must go to a public hospital, yet you have directors who are paid exorbitant amounts of money.’

Meanwhile, DHET spokesperson Lunga Ngqengelele said the minister wrote to Nehawu on Wednesday requesting a meeting as a sign of his commitment to resolving the issues.

‘Lecturers in the CET colleges are appointed against the operational hours of each Community Learning Centre (CLC). The operational hours vary from centre to centre depending on the subject/courses offered and whether or not the centre has its own infrastructure and/or full-time staff.

‘Most CLCs do not have their own facilities and operate from schools and as a result only teach after school hours,’ said Ngqengelele.

Amid the stand-off over transfers some CET college lecturers said they remained unpaid for services they rendered, a situation the department said would be resolved.

‘When CET lecturers were transferred to the department, some were paid fixed amounts and were on the payroll of the previous employers.

‘These lecturers continue to receive their monthly salaries. The other type of lecturers were paid through a claim system, meaning that the centre managers must submit certified claims on a monthly basis with a certification that the hours claimed were indeed offered.

‘This has been the case for lecturers in KwaZulu-Natal and the Western Cape because they are mainly full-time educators.

‘The department has since approved that they be moved to a fixed hourly system and it is being implemented. It, however, required that the department conducts a verification audit to avoid paying people who do not teach in the CLCs and the verification has since been completed,’ said Ngqengelele.

Despite reported disruptions at some colleges, he said the current assessment of the strike indicates that not all colleges and campuses have been affected.

‘There have been reported cases of intimidation to force students and lecturers out of classes. Colleges have been advised to apply for court interdicts where intimidation occurs. Initiatives will be put in place to ensure that lost teaching and learning time is addressed.’

Ngqengelele said the department had committed to signing two agreements regarding the permanent employment of the remaining TVET and CET support staff, and a settlement agreement facilitated by the secretary-general of the General Public Service Sector Co-ordinating Council – but Nehawu had not signed.

French workers battle to save hospitals and pensions

‘From The River To The Sea – Palestine Will Be Free!’