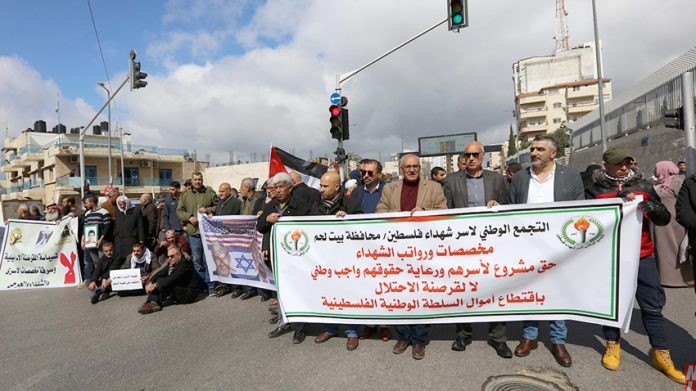 ISRAELI forces shot and injured at least three Palestinian protesters with live ammunition, while others suffered tear-gas suffocation as they suppressed naval protests off the coast of the northern besieged Gaza City, on Tuesday evening.

Medical workers said that several protesters suffered tear-gas suffocation and were transferred to a nearby medical point for treatment, while three Palestinians were shot and injured with live bullets.

Thousands of Palestinians had arrived at the northern border fence to take part in the naval protests against the Israeli siege imposed on the Gaza Strip, while dozens of boats sailed offshore.

Also on Tuesday, Israeli forces evicted a Palestinian family after demolishing their tent in the Ras al-Ahmar area, southeast of the Tubas district, in the northern Jordan Valley.

Prior to carrying out the demolition, Israeli forces surrounded the tent, which belongs to Jihad Beni Odeh, and evicted his entire family.

The demolition was carried out under the pretext that it was built without the nearly-impossible task to obtain an Israeli permit.

Israel rarely grants Palestinians permits to build in the West Bank and occupied East Jerusalem, although the estimated 550,000 Jewish Israeli settlers in the occupied Palestinian territory are more easily given building permits and allowed to expand their homes and properties.

Nearly all Palestinian applications for building permits in Area C – the more than 60% of the West Bank under full Israeli military control – are denied by the Israeli authorities, forcing communities to build illegally.

Forming a third of the occupied West Bank and with 88% of its land classified as Area C, the Jordan Valley has long been a strategic disputed area of land for Palestinians following Israel’s occupation in 1967.

During its weekly meeting on Tuesday, the Palestinian Cabinet, headed by Prime Minister Rami Hamdallah, denounced the Israeli decision to deduct the welfare payments of Palestinian prisoners’ and martyrs’ families, approved by the Israeli Knesset last June and adopted by the Israeli Cabinet earlier this week.

The cabinet said, in a statement, that this punitive measure ‘is a continuation of enacting racist laws that support the illegal Israeli occupation, undermine the two-state solution, and destroy peace prospects and aspirations to establish a sovereign, independent State of Palestine on the borders of 1967 with East Jerusalem as its capital.

‘Cutting tax funds is a direct violation of the Fourth Geneva Convention and international treaties and the Interim Agreement signed in September 1995 between Israel and the Palestinian Liberation Organisation (PLO). Therefore, this Israeli action is piracy of the Palestinian money and a clear international crime.’

The statement considered ‘the Israeli piracy of the Palestinian money a collective punishment that would initiate a catastrophic war against the Palestinian leadership and its nation, and would further restrict and blackmail the Palestinian Government, destroy it, and steal its ability to carry on providing services to its people and fulfil its commitments towards them.

‘Cutting money from our tax revenues puts the Palestinian economy at risk and threatens our abilities to … pay the salaries and wages of our employees on time; yet, we will not trade our fundamental national rights for any political money.

‘We are well-prepared for all possible scenarios if the Israeli government actually implements this illegal decision.’

The cabinet reiterated its support for the position of Palestinian President Mahmoud Abbas, saying: ‘The welfare we provide to prisoners and martyrs families is a national responsibility and not a gift or a grant.

‘It is an act of solidarity, social protection, and an integral part of the social contract between the State of Palestine and its citizens especially among the expansion of illegal Israeli settlements and the ongoing blockade over the Gaza Strip.

‘We will always stand with our prisoners and their victim families until they are freed and released from Israeli prisons unconditionally.’

The statement also called upon the international community ‘to act immediately against these threats and force Israel, the occupying power, to stop using Palestinian funds as a tool of collective punishment’.

The cabinet also called on Arab countries to ‘revive the Arab financial safety net to enable the Palestinian citizens to confront such punitive Israeli measures’.

‘The entire world must be aware that Israel, the occupying power, has no legal sovereignty over occupied Jerusalem or its Islamic and Christian holy sites.

‘We, therefore, totally reject all forms of Israeli violations against the Holy City and the Al-Aqsa Mosque.’

The cabinet also condemned Israel for its campaign to uproot and displace Palestinian citizens from their lands and houses in Masafer Yatta, in the southern West Bank district of Hebron, to seize the land and expand the surrounding settlements.

Additionally, the cabinet denounced the Israeli forces’ cutting off water supplies to the communities of Masafer Yatta depriving Palestinian citizens, including children, of the right to water.

‘It unveils the real face of the occupying power and disposes of Netanyahu’s claims that Israel promotes humanity, and uses its technological capabilities in helping countries in need to reclaim their water resources.’

• American award-winning singer, songwriter and producer, John Legend, has spoken out about standing up for human rights for Palestinians while on the ‘Real Time With Bill Maher’ show.

Legend appeared on the show on HBO on Saturday night with American comedian and political commentator Bill Maher.

He added: ‘It is a progressive point of view to speak up for the rights of Palestinians.’

This is not the first time that Legend stood up for Palestine as he has always been vocal in his support for the Palestinians.

During the 2014 Israel-Gaza conflict, he criticised former US Secretary of State John Kerry’s attempts to broker a ceasefire deal between Palestine and Israel.

In the same year, Legend gave a speech for graduates at the University of Pennsylvania, during which he urged the audience to humanise Palestinians, by saying: ‘It means we see a young Palestinian kid not as a future security threat or demographic challenge, but as a future father, mother and lover.’

‘Down with Bolsonaro!’ – thousands of Brazilians take to the streets

French workers battle to save hospitals and pensions

‘From The River To The Sea – Palestine Will Be Free!’