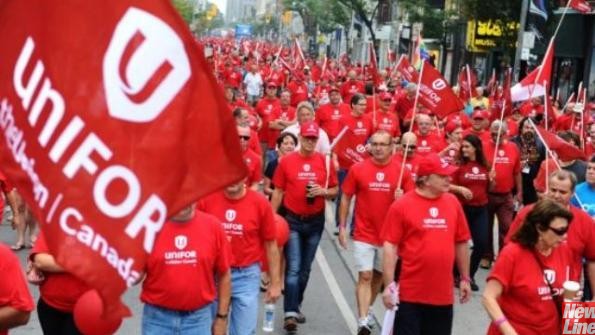 UNIFOR National President Jerry Dias, speaking during a press conference, has asked for all Canadians and Americans to boycott all General Motors vehicles that are made in Mexico.

That state of affairs is due to the recent news about the Oshawa General Motors plant closure in Toronto on January 25, as reported in the Canadian Press by journalist Nathan Denette.
Jerry Dias is fed up. At labour rallies, news conferences and anywhere people might listen, the head of Unifor has for more than two months been expressing a deep frustration about how General Motors has broken one promise too many with its plan to close its Oshawa Assembly Plant.
‘There’s nobody on the face of this earth that lies more than General Motors,’ alleged Dias in a recent interview. ‘That’s why we’re so furious, that’s why we’re running this campaign, and that’s why we’re slamming them every single day.’
Last weekend’s Super Bowl ad against GM, a walkout at a parts supplier on Friday, and the union’s call for a partial boycott of GM vehicles, are just the latest efforts to pressure the company financially, and to try and keep the looming closure of the plant in the eyes of the government and public.
For (Canadian President) Trudeau and Doug Ford, General Motors’ timing could hardly be worse. GM, however, has shown no sign of wavering in its decision, maintaining that the shutdown is part of a needed effort to become more efficient, and that it has already committed to generous retraining and retirement packages.
With the two adversaries dug in, the dispute is likely to be a drawn-out affair as Unifor looks to protect unionised jobs – and its reputation – amid a fast-evolving auto sector.
‘They have to show they can fight … It’s really understandable why Unifor is all in on this one,’ said Steven Tufts, an associate professor at York University who studies labour.
‘For Unifor, as a union, to make them more relevant, even to members outside of the auto sector, they have to show they can fight.’
The union, however, is fighting against a shrinking company. In 2007, General Motors was the world’s largest automaker, a titan of industry built on a century of development.
But high-profile stumbles, including its bankruptcy, bailout, and efforts to right the ship, have left the company’s production at about half of its peak.
Production cutbacks have had a direct effect on Canadian autoworkers, who have already endured closures or layoffs at several Ontario operations over the past decade. Dias maintains that several rounds of cuts have arrived not long after assurances from GM that they weren’t coming. GM declined an interview request.
The fight has an added level of tension for Unifor, since the share of unionised autoworkers has been shrinking for the past two decades as the Detroit Three cut back, even as non-unionised Toyota and Honda have added volume in Ontario.
‘For Unifor, this is significant, because if the industry is shifting away from unionised to non-unionised, that’s a big deal,’ said Charlotte Yates, an expert on auto industry labour issues at the University of Guelph.
The campaign also raises questions about priorities and focus at the union itself. Autoworkers only make up about 13 per cent of the membership following the mega-merger between the Canadian Auto Workers and the Communications, Energy and Paperworkers Union of Canada in 2013 to create 315,000-member strong Unifor.
‘It’s really about them fighting for the definition of what the union is based upon, and where is it going in the future,’ said Tufts.
Dias, however, said members understand the need to fight GM and would expect nothing less. ‘The only chance you have is rolling up your sleeves and getting at it. And that’s who we are as an organisation.
‘We’re a fighting union.’
While the union has been pulling out all the stops on this fight, it says governments have not been following suit. Dias cajoled Ontario Premier Doug Ford and federal Economic Development Minister Navdeep Bains into raising the issue with GM. But apart from brief meetings in January with the company, both have been largely silent on the issue.
‘When governments say nothing, it’s almost as if it’s a passive acceptance of the company’s right to make the decision,’ said Dias. ‘They need to know that if in fact you’re going to walk away and betray Canadians, there’s going to be a hell of a price to pay.’
According to Yates, governments in Canada do have levers to influence industry, just as US President Donald Trump has tried to do.
‘This isn’t posturing by Unifor; what they’re telling government is this industry is vital, and you’ve got to fight for it,’ said Yates.
She said the government’s response has been to express some disappointment and then move on, but they need to understand that auto jobs aren’t like other jobs.
As Dias has been at pains to emphasise, each of the 2,600 union jobs being lost at Oshawa support between seven to 10 spinoff jobs.
The closure is also part of a longer-term decline in Canada’s auto sector, which has seen production numbers fall from a peak of almost three million vehicles in 1999 and 17 per cent of North American auto production, to under two million vehicles and 12 per cent of production last year.
So GM’s decision to close the Oshawa plant raises fears for the future of making cars in Canada as a whole. ‘The closure of GM’s Oshawa plant won’t kill the industry, and doesn’t portend the end of GM in Canada, but it is another step toward it,’ said Yates.
‘When you lose an assembly plant, it feels like you’re tugging on that thread that could it unravel the whole sweater.’
Meanwhile, Dias has promised a fight to the end. ‘The fight that we’re waging is a fight that’s going to continue and we’re not going to slow down. This isn’t about the labour movement retreating or somehow the labour movement accepting the decisions of raw capitalism as inevitable,’ said Dias.
‘From a leadership point of view, we’re all in. And we always have been, because losing is not an option.’