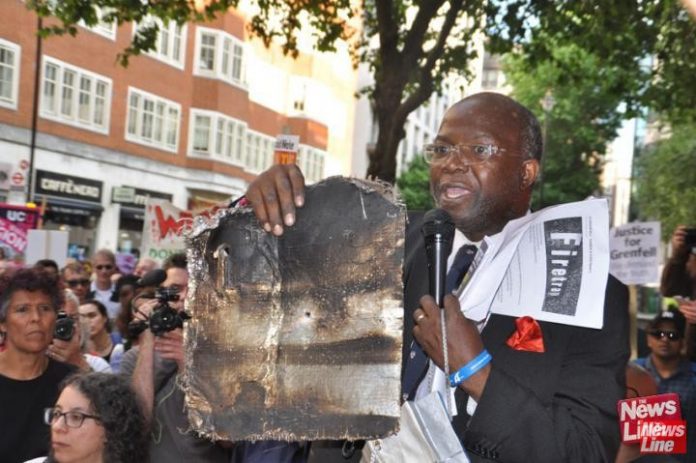 A TOXIC cocktail of benzene, hydrogen cyanide (HCN), as well as many known cancer-causing chemicals and fibres have been found in soil taken from the west London area around where the Grenfell Tower fire took place, research by the University of Central Lancashire (UCLan) revealed yesterday.

This puts residents in the local area at risk of developing asthma, cancer or mesothelioma.

Natasha Elcock, chairwoman of Grenfell United, said the findings were ‘alarming and hugely upsetting to read’.

She said: ‘Twenty-one months after the fire, the government has yet to carry out a single soil test or offer a proper health screening programme to the community.

‘Testing in the community must start immediately and by immediately, we mean yesterday.’

Soil samples were gathered six months after the fire by Professor Anna Stec, who said the levels of toxic chemicals found were ‘many times higher than normal’. Soil and debris samples were taken from six locations up to 1.2km from the Grenfell Tower.

She said: ‘Fires release a rich cocktail of pollutants, many of them acutely or chronically toxic.

‘There is an increased risk of a number of health problems to those in the local area, from asthma to cancer.’

The study uncovered ‘significant environmental contamination’ in the surrounding area, including in oily deposits collected 17 months after the tragic fire which claimed the lives of 72 men, women and children.

She added: ‘There is undoubtedly evidence of contamination in the area surrounding the tower, which highlights the need for further in-depth, independent analysis to quantify any risks to residents.’

An abstract of the University of Central Lancashire (UCLan) research by Prof Anna Stec stated: ‘Soil samples collected within 50m of the Tower also contained phosphorous flame retardants, materials commonly used in insulation foams and upholstered furniture that are potentially toxic to the nervous system.

‘In this soil, as well as in fallen debris and char samples, researchers identified synthetic vitreous fibres matching those present in products used in the Grenfell Tower refurbishment.

‘Elevated concentrations of benzene, a proven carcinogen, were discovered up to 140m away from the Tower in quantities 25-40 times higher than those typically found in urban soils.

‘There is undoubtedly evidence of contamination in the area surrounding the Tower, which highlights the need for further in-depth, independent analysis to quantify any risks to residents.

‘Dust and a yellow oily deposit from a window blind inside a flat 160m from the Tower, collected 17 months after the fire, were also found to contain isocyanates – potent respiratory sensitisers that can lead to asthma after a single exposure.

‘These substances were discovered in quantities that could indicate that they resulted from the burning of specific materials which were used in the 2016 refurbishment of Grenfell Tower.’