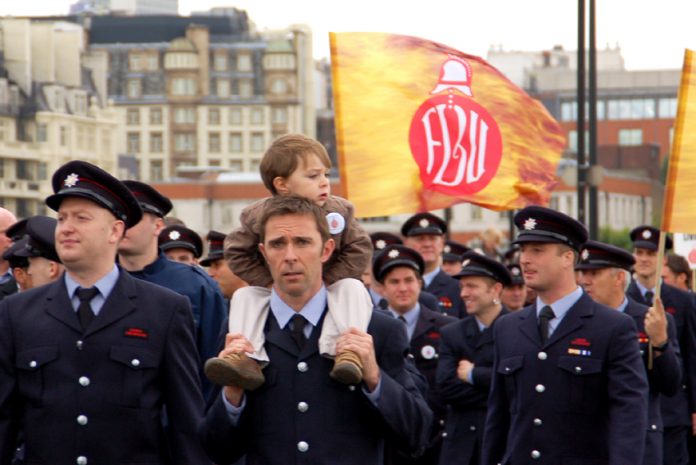 London firefighters have voted overwhelmingly for strike action in a dispute over changes to shift patterns, and have decided to begin their campaign with two eight hour strikes.

The FBU had said in a statement on Thursday: ‘London firefighters have voted by 3,482 to 943 to take strike action unless London Fire Brigade Commissioner Ron Dobson withdraws his letter of 11 August which began the legal process of sacking the capital’s 5,557 uniformed and 41 non-operational firefighters.

‘Firefighters hate going on strike – but they hate being bullied even more.

‘This vote demonstrates that London firefighters will fight these mass sackings every step of the way.

‘I hope that even at this late stage, Ron Dobson will do the sensible thing, so that we can get round a table with him and sort out our differences over shift patterns without a gun being held to our heads.’

The union held off announcing strike dates for 24 hours in order to give the London Fire Brigade a last chance ‘to do the sensible thing and withdraw the letters of dismissal so we can return to negotiating on the question of shift patterns,’ said FBU executive member for London, Ian Leahair.

With no word from the London Fire Brigade, the regional committee met yesterday to set the dates for the first strikes.

London firefighters had been taking industrial action short of a strike, including an overtime ban and a ban on ‘acting up’, since Friday 24 September.

In a circular, Wrack informed branches: ‘Please note that the result of the ballot as to whether members of the FBU are prepared to take part in industrial action consisting of a strike in relation to the above dispute is as follows:

‘Number of individuals answering “no”: 943

‘A majority voted in favour of strike action.’

Rising prices ‘are a price worth paying’ says Johnson