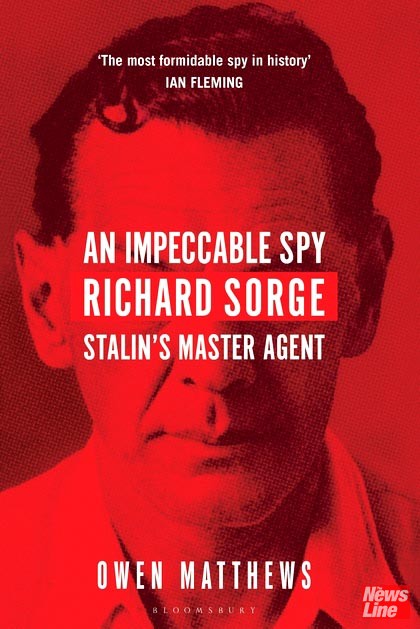 THE SUBJECT of this book, Richard Sorge, is the daring, unequalled spy whose intelligence turned the tide of the Second World War and alerted Stalin to the imminent invasion of the Soviet Union by the Nazis.

Author Owen Matthews ventures that he was ‘one of the greatest spies who ever lived’.

His work in Japan revealed to disbelieving GRU agents in Moscow in 1941 that Japan had no intention of opening a front against Russia.

As a result, in November 1941, with the Nazis advancing on Moscow, thousands of Siberian reinforcements freed from the Japanese threat were diverted from the east to join the Battle for Moscow.

‘They might not have been there without the efforts of a German communist spy operating on the far side of the world … yet was distrusted by his own spymasters in Moscow … Richard Sorge’s brilliant work played a crucial role in saving the Soviet Union from disaster in 1941 and enabled Stalin’s eventual victory in 1945.’

So writes Matthews in tribute to his subject.

Sorge’s life and exploits are much documented, in books and films since the 1960s, as well as novels (including a graphic novel of 2008) in which he pops up as a ‘Russian James Bond’. Sorge himself wrote a great deal in memoirs, the Japanese kept very full files on him and so did the Germans at the time of the war, since he fed them invaluable intelligence about what Japanese intentions were at the highest levels of government.

Every member of Sorge’s spy ring ‘sang like canaries’, according to Matthews, when they were arrested in October 1941 and the Japanese recorded it all.

What Matthews’ new biography brings with it is Russian archive material recently declassified.

Sorge was born in 1895 into the ferment of Azerbaijan’s capital Baku, with its oil and gas and equally explosive social divisions. His father was a German banker, his mother Russian and they moved to Berlin when he was four.

In 1914, he signed up to the slaughter of the First World War as a right-wing nationalist, took the shrapnel which shattered his legs and fingers, and emerged as a communist proletarian fighter during his recovery, after a nurse provided him with Marx’s Capital and Engels’ Anti-Duhring.

Sorge played a full part in the German revolutionary movement that erupted amongst the sailors of Kiel in 1918 and stood firm against the Social Democratic Party’s betrayal, organising and agitating in the German Communist Party, including work as a journalist for bulletins and Communist Party newspapers, which stood him in good stead for his cover as a spy throughout his career.

With episodic eruptions under the Spartacists in Berlin and in the Ruhr against a putsch, the German revolution had lost its leadership. By 1924, the Bolshevik Party had lost Lenin too, and the Comintern he had set up came to the German Communist Party’s congress to head hunt the best elements.

They took Sorge back with them, where in Moscow he was given a job in the ‘International Communications Centre’ and progressed to his first spy mission in Sweden.

The following five years saw the consolidation of Stalin’s personal dictatorship and the removal of Bolsheviks from office, even if like Bukharin (for whom Sorge worked as a secretary for a time) they were involved in such expulsions. Sorge himself was an unruly subordinate, who never abandoned his communist outlook.

By the time Stalin had consolidated his ‘socialism in a single country’ methods and outlook, Sorge was officially removed from the Comintern, banned from the Soviet Union for a time and then forced to make a humiliating retraction of his errors before being transferred to the Fourth Directorate of the Red Army’s General Staff under General Jan Karlovich Berzin.

It was Berzin who sent Sorge on to his brilliant career in the Far East in 1929.

In Shanghai, a city of 3,000 brothels, room-service heroin, extravagant cocktail restaurants, Sorge seduced the German expats, most of them Nazis, and had a high time of it as a journalist and ‘bottle-mate’.

He even joined the Nazi Party to complete his cover as a journalist for German publications.

Whilst insinuation into the German contacts was straightforward, making his way into Chinese society was more difficult, especially since the Chinese communists had met political disaster at the hands of the nationalists under Chiang Kai-shek in the Shanghai massacre of 1927.

Despite all the difficulties, Sorge’s group weathered the drunken indiscretions, the treacherous associations with White Russian émigrés and the nearly blown cover when a drunken motorcycle accident left Sorge hospitalised with a jacket full of secret papers.

Sorge himself feared for his life when top NKVD official Genrikh Samuilovich Lyushkov, a butcher of thousands and now on the kill list himself, defected to the Japanese at the Manchuria border and told them everything about the weakened state of the Soviet military after Stalin’s purges had effectively destroyed the leadership by 1938. (That incident encouraged the Japanese in a border skirmish in 1938 which heightened Stalin’s fears of a Japanese invasion, making Sorge’s future revelations all the more strategically important.)

Sorge himself set up a contact radio with Vladivostok through a brilliant improviser, Max Clausen, and secured the friendship of a valuable German officer in Japan, Lieutenant Colonel Eugen Ott. By then, his lover (one of a great many), Agnes Smedley, had made approaches with a key Japanese contact, Hotsumi Osaka, himself a respected journalist, posted to Shanghai in 1928.

Osaka had desirable contacts with the Japanese consulate there, as well as Japanese businessmen and officials of the Chinese nationalist government. He later became an assistant to the Japanese prime minister’s office, with access to all the papers there.

The Japanese ambition to extend its empire and turn Manchuria, with a border with Russia, into a puppet state was now a target for Sorge’s spy operations and would occupy him for ten years, against a near-hysterical obsession in Moscow that a Japanese invasion of Russia was a greater threat than that from Germany.

With his analysis of the failed Japanese army coup of February 26 1936, Sorge and his group established complete trust with Ott as a German patriot and the full collaboration of his Japanese contacts, through Osaka, at the highest levels of government. He rose up in status in the German embassy in Tokyo, and was even offered an official position there.

Everything was in place for the operations of World War Two except the trust of Moscow.

Sorge’s refusal to return to Moscow in November 1936 saved him from Stalin’s purges, but marked him as an untrustworthy source. Stalin in person went to the Fourth Directorate in 1937 to rage that it had fallen into German hands: ‘Soviet intelligence is filled with wreckers, saboteurs, Trotskyist-fascist spies and murderers.’

A succession of heads of the Directorate were appointed and shot, until it was taken over by a cynical career bureaucrat skilled in self-preservation, Golikov.

Golikov and NKVD head Beria both ignored Sorge’s repeated warnings about an imminent German invasion, reinforcing what Stalin wanted to hear: that the Stalin-Hitler Pact of 1939 held true, and there would be no German aggression.

With the Japanese invasion of China and the German annexation of Austria and invasion of Poland, it was inevitable that a world war was imminent.

When Stalin received a telegram from Sorge dated June 1 1941, he was told that Major Erwin Scholl at the German embassy in Japan had informed him that Operation Barbarossa, the invasion, would take place on June 15th or shortly after, Stalin scribbled over it: ‘Suspicious. To be listed with telegrams intended as provocations’.

Stalin scribbled on Sorge’s May 20th report that he was ‘a shit who ran small factories and brothels’, apparently confusing Sorge with his radio operator Clausen, who by this time was losing his grip.

With the Germans advancing on Moscow, Sorge continued to provide the intelligence that would save the USSR, even as Japanese spy hunters were closing in on his ring and the first arrests were made; and even as Sorge himself was suspected by the Nazis of being a double agent, sending the ‘Butcher of Warsaw’, Gestapo colonel Joseph Meisinger, out to investigate. Sorge went out boozing with him.

The vacillations of the Japanese intentions in Manchuria at the Russian border were faithfully detailed by Hotsumi Osaka from the prime minister’s office.

The Japanese would honour their peace agreement with Russia, wait for Germany to defeat Russia in Moscow and then halt further German advances with a Japanese invasion of Siberia. Meanwhile, the Japanese army would attack Singapore to the south. In the north, there were problems for them with the change of the seasons imminent and the poor supply of oil.

The telegram in the military archives from Sorge bearing all this information has the initials of Stalin, Beria and Voroshilov on it and the words ‘can be trusted’, for the first time.

The considerable Red Army forces in the Far East were withdrawn for the Battle for Moscow and the course of the war changed.

Sorge was arrested in 1941, tried by the Japanese and hung in 1944, abandoned by those he had saved by his vital supply of information.

Sorge was finally awarded the title Hero of the Soviet Union in 1964 after Krushchev saw a French/German co-production of a film ‘Who Are You, Mr Sorge?’ and wanted answers himself.

Matthews’ book is a formidable achievement of scholarly organisation of vast amounts of material, clearly and unassailably presented. He adores his subject.

‘We will resist until every inch of Palestine is free!’ – message from London Nakba Day rally

‘The cold-blooded murder’ of Shireen Abu Akleh by an Israeli sniper!