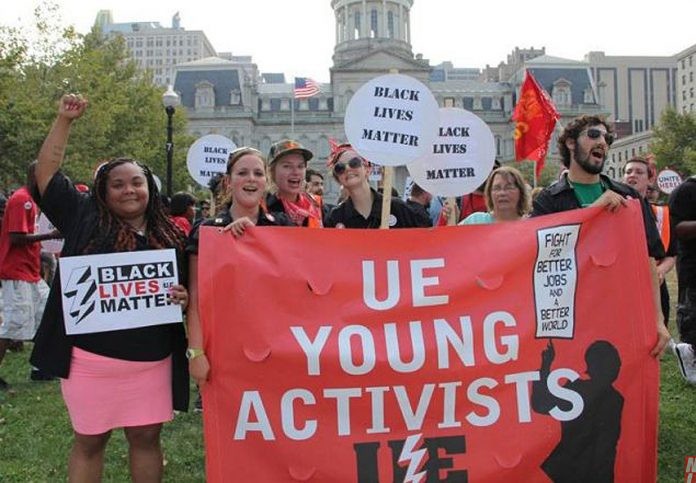 UP to 1,700 workers at a GE Transportation plant in Erie, Pennsylvania, walked out on strike last Tuesday, marking the first large-scale work stoppage in the US manufacturing sector in three years.

Union members with the United Electrical, Radio and Machine Workers of America (UE) say the factory’s incoming owner, Pennsylvania-based Wabtec Corp., is trying to impose mandatory overtime, a lower pay scale for new employees, and the use of temporary workers in the facility.

Wabtec have just completed an $11 billion deal to merge with GE’s transportation division, which includes the Erie plant where locals have built locomotives for decades.

Workers authorised the union to wage a strike after they failed to secure an interim agreement with Wabtec extending the terms of their contract with GE. As the new employer at the plant, Wabtec is obligated to recognise the union but has the freedom to negotiate its own new contract.

Union members felt they needed to go on strike in order to protect the wages and high working standards inside the facility, where pay averages around $35 an hour, said Jonathan Kissam, a union spokesman.

He added that many workers already volunteer for overtime work but don’t want it to be mandatory, fearing it could ruin weekends with their families.

He also said introducing lower pay for new employees would create a two-tier system inside the plant, causing rifts between different generations of employees.

‘This is a multi-generational plant. Some of them, their grandparents worked there,’ Kissam said. ‘So they’re unwilling to sell out their own children.’

He added, ‘Wabtec wants to turn this into an Amazon warehouse.’

Wabtec proposed maintaining the same payscales for current employees, while new hires would come in at a ‘competitive wage’ for the industry, said Deia Campanelli, a Wabtec spokeswoman.

She said the company wanted the flexibility to require overtime ‘only when necessary’ to hit production goals.

Campanelli described the company’s offer as on a par with the terms at a separate Wabtec facility in Pennsylvania that’s also unionised by UE.

‘We are disappointed in their decision,’ she said. ‘These are great-paying jobs for that community, for that region.’

Unions are leery of two-tier systems for good reason. As older workers under the established pay scales change jobs or retire, the share of employees under the lower payscales grows.

The differing rates can sow friction within the union, as newer workers know they’ll never make the same money as their veteran counterparts. A controversial two-tier proposal became the primary sticking point in the Teamsters’ recent negotiations with UPS for a contract covering 260,000 workers.

The number of worker strikes in the United States has shot up in the past year, most notably among teachers, who have led walkouts in states around the country. The improved economy has also given many workers in the private sector more bargaining power, as unemployment stays low and qualified workers are harder to come by.

The last large work stoppage in manufacturing was a lockout of United Steelworkers members at Allegheny Technologies, according to data from the Bureau of Labor Statistics.

The last time workers at the Erie GE plant went on strike was in 1969, when they were off the job for more than three months. Kissam said as of Tuesday afternoon there were no negotiations scheduled with Wabtec, suggesting a resolution wasn’t imminent.

Meanwhile, ‘The oligarchs are shaking in their boots tonight,’ Ald. Carlos Ramirez-Rosa (35th) told a crowd gathered on Tuesday night at Puebla Restaurant to celebrate his re-election against challenger Amanda Yu Dieterich.

‘Our continued organising and movement-building over the last four years is paying dividends and it appears to be a total transformation of political power at city hall from the bottom up.’

Rosa is one of the members of the Chicago Democratic Socialists of America (DSA) who won outright on Tuesday. New member Daniel La Spata also upset Alderman Proco ‘Joe’ Moreno in the Near Northwest Side’s 1st Ward.

Socialist Rosanna Rodríguez-Sánchez will head to April’s runoff against incumbent Ald. Deb Mell in the 33rd Ward. Rodríguez-Sánchez broke into tears of joy several times at her watch party at Chief O’Neils in Avondale after hearing she’d earned the most votes in the three-way race.

The success of the group – which is not technically a party but a ‘political and activist organisation’ – was proof that the city’s machine politics have been broken, she said.

Rosa, who turned 30 years old earlier this month, had been DSA’s only elected official in Chicago. Local DSA co-chair Lucie Macías says she is excited that Rosa will have company.

‘For the third biggest city in the country to have a DSA caucus is amazing, and having members around Carlos will only amplify the causes that working-class Chicago – not the rich – wants,’ said Macías.

Macías said the local group supports a democratically elected school board and rent control and opposes school closures and a plan to build a new police training academy in Garfield Park.

Nationally, the group favours Medicare for All and a Green New Deal that would move the nation to 100 per cent renewable electricity while guaranteeing jobs for the unemployed.

‘We believe that working people should run both the economy and society democratically to meet human needs, not to make profits for a few,’ its website says.

The news that nearly all of DSA’s council candidates won or will face runoffs set off a raucous celebration at a Chicago socialists watch party at the office of progressive magazine In These Times in Logan Square.

It’s the most socialist alderman in Chicago since the 1910s, when the city elected several aldermen who belonged to the Socialist Party founded by Eugene V. Debs. Debs, an Indiana native who rose to fame (and notoriety) during his role in the Pullman porters strike, ran as his party’s presidential candidate five times, including a 1912 campaign in which he earned 900,000 votes, or 6 per cent of the popular vote.

The DSA’s success here mirrors a national surge in membership and political influence since avowed democratic socialist Bernie Sanders’s 2016 presidential campaign and the election of Trump. Sanders, who announced he is running for president in 2020, will speak at Navy Pier on Sunday.

After claiming roughly 5,000 members in 2015, there are now about 60,000 card-carrying DSA members nationwide and about 1,300 amongst Chicago’s three chapters.

Trump is paying attention to socialism’s recent rise. He declared ‘America will never be a socialist nation,’ in his February 5 State of the Union speech.

‘Immigration detention: A culture of death self harm and trauma’

1-metre rule abandoned when schools re-open! – parents to be fined...

The Editor - 3rd July 2020
0
THE ONE-METRE distancing rule is to be abandoned in schools when they open in September, the Tory government announced yesterday to the alarm of...

‘The World Must Act Now Or Never For A Palestinian State’

Now is the time to defend the Chinese revolution!

TUC Proposes A Labour Front With The Tories

‘Immigration detention: A culture of death self harm and trauma’

1-metre rule abandoned when schools re-open! – parents to be fined if they keep their children at home

The Editor - 3rd July 2020
0
THE ONE-METRE distancing rule is to be abandoned in schools when they open in September,...

‘The World Must Act Now Or Never For A Palestinian State’

The Editor - 2nd July 2020
0
FATAH issued a warning yesterday that the annexation issue is still a dangerously imminent issue...

The Editor - 1st July 2020
0
THE LINK between outbreaks of Covid-19 at meat processing plants and the sector’s widespread exploitation...